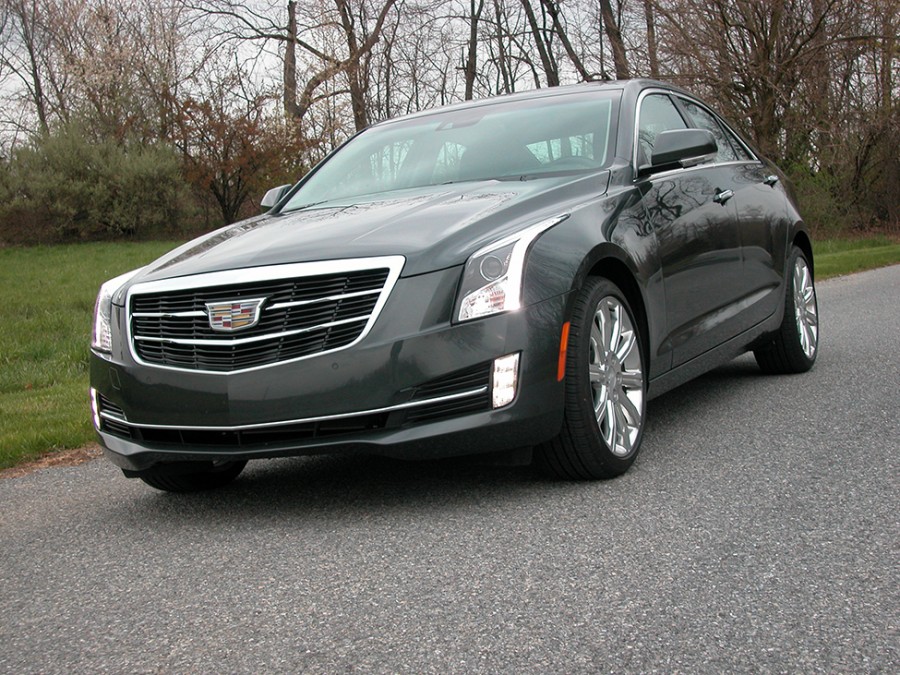 It’s been said that in spring a man’s fancy turns to love. But for some, it turns to buying a new car. So if you’re in the market and can afford a high-end luxury car, and can wean away from the likes of a Benz or BMW, you owe it to yourself to test drive the 2016 Cadillac ATS4 with 3.6L V6 engine and AWD.

This new breed of Cadillac is none like those of yesteryear. Those were land yachts as they were called, meaning wallowy in the turns, slushy ride, steering numb but it road well. The ATS sedan tested is a testament to Cadillac’s commitment to change perceptions of earlier models.

Powered by a choice of three engines: a 2.0L, turbo four-cylinder with 272-hp and 295 lb/ft of torque, a 2.5L, 202-hp four cylinder with 191 lb/ft of torque and a 3.6L, 321-hp V6, with 275 lb/ft of torque. We tested the latter that is designated as an ATS4 for its AWD capability. When coupled to a silky-smooth 8-speed automatic transmission (a 6-speed manual is also offered), the combo garnered EPA mileage estimates of 19 city, 28-highway mpg. As such, acceleration with the 3.6L felt more like a small V8 under the hood. Standing starts were quick and there was no want for power when passing. The so equipped sedan was independently 0-60 timed at a quick 5.4 seconds. Want even better performance, check out the ATS-V. Its hot.

While all three engines have their benefits, it’s likely the 3.6L will outsell the others. It would have been interesting to have tested the 2.0L turbo judging from its impressive power, torque and efficiency ratings. But with a 3,430 curb weight, it just may be somewhat underpowered as would be the 2.5L. Both would seemingly be breathing hard when full throttle is quickly needed.

Handling wise, the ATS can easily match and exceed that of the BMW 3-Series or Mercedes’ C-Class sedans. Sharp turns taken at speed show virtually little body lean and the car hugs the road with tenacity. With good reflexes and a rigid chassis, it’s certainly not the roly-poly Cadillac of past.

So too for the ride on Michelin 18-inch tires. It’s Euro firm that folks seem to prefer for its road feedback through the nicely weighted variable electric steering. This car has it all. Controlled handling, exemplary ride and dashing good looks. If you want an even better ride, Cadillac offers the adjustable driver FE3 performance suspension with magnetic ride control and real time dampening.

This new generation Caddy has all the latest technologies embedded within it and carries it further by its 4G LTE Wi-Fi hotspot capability. Add too an 8-inch display that serves several functions such as GPS nav, audio, rearview camera and a variety of apps including a weather app that shows hourly and weekly conditions, and you have a fully comprehensive cockpit. This is all positioned within a comfy leather interior featuring heated front seats that have extended under-thigh support and a rear seat suitable for two adults. Optionally available are performance seats with power adjustable bolsters and wireless phone charging, to name but a few.

Slip into the cabin and you’ll notice real wood, metal plating or carbon fiber trim depending on your tastes. What you won’t notice until the car is driven, is the safety enhancements like forward collision alert that buzzes/vibrates the drivers’ seat, front/rear automatic braking, side blind zone alert, rear cross-traffic alert, lane departure warning and adaptive speed control.

There’s also a Mode switch on the console for Tour, Sport, Snow/Ice, all dependent on your driving preferences.

The trunk is rated at 10.4 cubic feet, which isn’t much. But it can hold one large roll-a-long luggage and a hoofer type golf bag with the long clubs pulled and stacked atop the bag. There is, however, a pass-through to carry narrow lengthy items.

With only a few options such as the Driver Assist Package ($2,885) that adds adaptive cruise, head up display, front/rear automatic braking and more, plus 18-inch wheels ($850), Cold Weather Package ($600) offering heated seats and steering wheel, and special Phantom gray metallic paint ($495) that brings the base price of $49,210 to $55,835 with delivery.

In government crash safety ratings, the ATS4 earned a full five stars for frontal crash and five for rollover. Frontal and side crash were not as yet rated. But overall, good marks for an American made automotive icon.