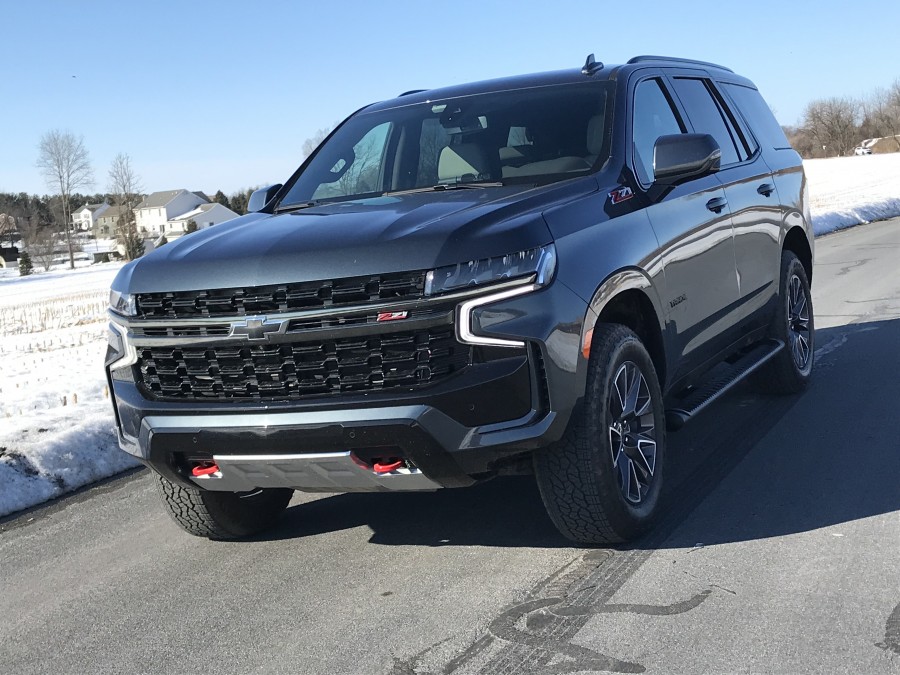 Chevrolet’s Tahoe has been a formidable full-size SUV long before most others entered the market. It’s the somewhat smaller version of its brother the Chevy Suburban, a voluminous people and cargo hauler. Both of which are the choice of transportation for the Secret Service and other federal agencies.

Tahoe satisfies the needs of those who want appreciable cargo room, a spacious interior and the power to tow sizable trailers and boats. And it’s appreciably new for 2021.

In this its fifth generation, Tahoe now sports a more bolder look, class-leading cargo space, an air suspension, magnetic ride control, upgraded technology/safety features, and a 10-inch touchscreen. It can be configured to accommodate up to nine passengers with a bench front and second row seats, although most folks will opt for the seven-seat configuration with captain’s chairs front and second row. And it can be had in LS, LT, RST, Z71, Premier and High-Country trim. We were privileged to test the Z71 Off-Road model.

The biggest news is that Tahoe now sports an independent rear suspension for an improved ride, plus an optional diesel engine.

Upon a 13.5-inch step-in into the cabin using the running boards, or 24 inches directly in, Tahoe’s interior would appear to be from a luxury sedan with comfy, nicely supportive heated/cooled front seats and the latest amenities. All controls are laid out in a pleasing agronomical array and HVAC controls are large and easy to use even with gloved hands. Below them is a large wireless cell phone charger pad that doubles as a small bin.

The first interior feature to catch your eyes is that there’s no console or column mounted transmission lever. In its place are vertically mounted R, N and D marked pull switches, while P (park) and Low gear are push switches. They may take a little getting used to, but they’re quick and convenient and make for a clean unobstructed appearance.

On the left side of the dash are the 4WD switches and I like that Chevy has an Auto mode in addition to the 2WD, 4High, 4Low gearing. Below them is the optional Air Ride Adaptive Suspension rotary switch that raises/lowers the body providing an increase in ground clearance of from eight to 10 inches. The latter is helpful when going off-road, leveling a heavy load and towing a heavy trailer/hitch that puts weight on the rear end.

The gauge cluster has real temperature pressure gauges along with a driver information display that shows drive modes of Normal, Sport, Off-Road and Tow/Haul.

Heated second row seats are comfy and slide well forward for ingress/egress into the third-row seats that can actually accommodate two adults as legroom there has increased 10 inches since Tahoe’s length was increased by 6.8 inches. The backs of the front seats had optional video screens to keep the kids happy on long trips.

Tahoe has a remote opening tailgate window, a nicety that has seem to have disappeared on most SUVs. The feature comes in handy when carrying long items that can extend out through the window opening.

Back in the class leading cargo area, that has a 33-inch liftover, there’s 25.5 cubic feet with the third-row seats up measuring 21 inches deep, 48 wide and 33 high. Power fold the third and capacity increases to 72.6 cubic feet for 56 inches of loading depth. Fold the second row and there’s 122.9 cubic feet for 84 inches of depth. Both rows fold upon pushing four individual switches on the cargo wall. There’s also a two-inch deep bin beneath the cargo floor for small item storage.
With the new independent rear suspension, Tahoe rides even better than it did especially with the optional magnetic ride control. It’s an SUV that has riding characteristics similar to a sedan on Goodyear Wrangler 20-inch tires. And the ride is quiet, smooth and comforting on long trips.

Handling is impressive for a large SUV that has a 39.7 foot turning diameter. There’s a little body lean in sharp turns taken at too high a speed. But its 5,561-pound curb weigh maintains a planted stance. A limited-slip differential is standard and provides an extra traction on off-road, in mucky mud or deep snow.

To own this abundantly equipped and improved Tahoe, it’ll cost because a lot of the features are extra cost. Our Z71 bottom-lined at $68,940 after a base price of $59,200. Options drive up the price, unfortunately a lot of them are packed within two separate packages. For example, the Z71 package costs $5,735 and includes the air suspension, hitch guidance w/hitch view, enhanced cooling radiator, trailer brake controller, heated seats/wheel and an extremely long list of other goodies.

Then there’s the rear media and nav package ($2,400) that adds the infotainment screen, rear seat media system and more.
Its too bad buyers can’t pick and choose individual features rather than having them packed into one expensive package. Many safety features though are standard such as automatic emergency braking, forward collision alert, front pedestrian braking, following distance indication and more.

If you need interior space, cargo room and towing capability, Tahoe may be for you.