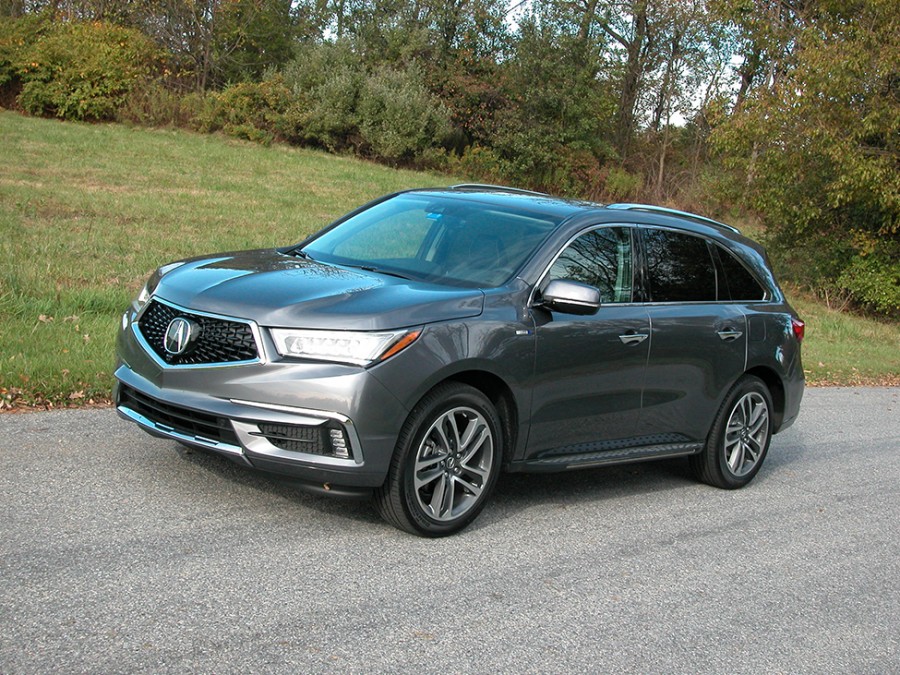 Acura’s MDX SUV is the carmakers top selling vehicle, and the #1 selling 3-row luxury SUV to date. A testament to that is that our daughter and daughter-in-law both own 2019 MDXs.

Offered in base, Technology, A-Spec, Advance and AWD Sport Hybrid, the latter retains all of MDX’s premiere traits with hybrid technology for increased fuel economy, but with a sporty touch.

For 2020, the AWD Acura MDX Sport Hybrid combines a 3.0-liter, i-VTEC V6 engine with three electric motors, one driving the front wheels and two driving the rears. The combination of gasoline and electric has a total output of 321-hp and 289 lb/ft of torque sending power to the wheels through a 7-speed dual-clutch automatic transmission. EPA rates the hybrid at 26 city, 27-highway mpg.

With 7.3 inches of ground clearance, the AWD MDX Hybrid can handle some appreciable snow. It also comes with AWD Lock in the event the MDX should get stuck. So equipped, MDX has a weight distribution of 57/43.

Performance wise, the three-row Sport Hybrid has selectable Comfort, Normal, Sport and Sport Plus driving modes. In Normal, the MDX accelerates with a linear explosion of power. Switch to Sport or Sport Plus, and you’ll experience push-you-back-in-the-seat acceleration from a standing stop. Passing 18 wheelers on an interstate is a mere push on the accelerator pedal. MDX’s heft (4,486 pounds) however, can be felt under strong acceleration.

Incidentally, the hybrid battery gets recharged in part via regenerative braking. Under hybrid power, the tachometer understandably drops to zero.

MDX rides heavenly and quietly on Continental 20-inch tires. It vehicle remains planted in sharp turns and during quick maneuvers thanks to Acura’s Active Damper System. MDX exudes a secure feeling no matter the road surface. Turn the steering wheel an inch in either direction and the SUVs nose points 20 degrees accordingly. It’s quick and positive and parks easily with a 38.4 turning diameter.

MDX Sport Hybrid’s interior can be configured for seven with a second row bench seat or six with second row (heated) captain’s chairs separated by a massive console. We tested the latter with the third row mainly for youngsters. Third row access isn’t bad as the second rows slide and tilt well forward.

MDX Sport Hybrid is outfitted with running boards for a 12.5-inch step-in into the cabin. They’re really not needed as step-in without them is a mere 19 inches. But they do help small kids and seniors for easier ingress/egress.

Perforated leather, heated/cooled front seats are sofa soft and supportive. The grey leather in the tester sported contrasting white stitching and piping that gave the seats a sporty, classy look.

But the foremost eye-catcher are the twin 7-inch displays. The top one displays navigation with voice recognition and rearview camera with three views that is operated via a large controller (mouse) on the vertical stack. The lower screen serves the HVAC, apps, audio, Apple CarPlay/Android Auto, Pandora and Acura-Link infotainment system.

Atop the console is a space saving push button electronic transmission shifter. If coming off a stick shifter on the console, or column, it may take a bit of getting used to. But it’s simple and gears connect instantly. In fact, it’s fun to use.

There are dual controls for the HVAC system such as airflow and heated/cooled seats. Cabin temperature selection too employs a dash toggle switch for driver and passenger but can also be selected on the screen. The only item missing from this nicely endowed SUV is a wireless phone charger. Presume Acura engineers ran out of space for one.

Back in the cargo area and with the third row upright, there’s 15 cubic feet of space that measures 20 inches deep, 45.5 wide and 29 high. Flip them and space increases to 38.4 cubic feet for 47 inches of depth. Flip the second row captain’s chairs and capacity expands to 68.4 cubic feet for 80 inches of loading depth.

Beneath the rearmost cargo floor is a 6.5-inch deep, full-width storage bin. It’s a convenient place to stow small or medium size items out of sight. And a low 30-inch lift-over eases cargo loading.

The MDX Sport Hybrid comes with an extremely long list of standard items with the only extra cost being a delivery charge of $995. As such, the MDX began life with a base price of $59,650, and bottom-lined at $60,645.

This most capable luxury SUV comes with a 5 year/70K mile powertrain warranty, plus a 4/50K limited vehicle warranty
Acura’s MDX in conventional or hybrid form, can be considered the benchmark of comparable three-row luxury SUVs.

Next ArticleLooking for a hybrid luxury sedan? Check out the Lexus ES300h, it’s a compelling choice
Previous ArticleKia’s subcompact Soul is a spacious, economical and affordable daily driver