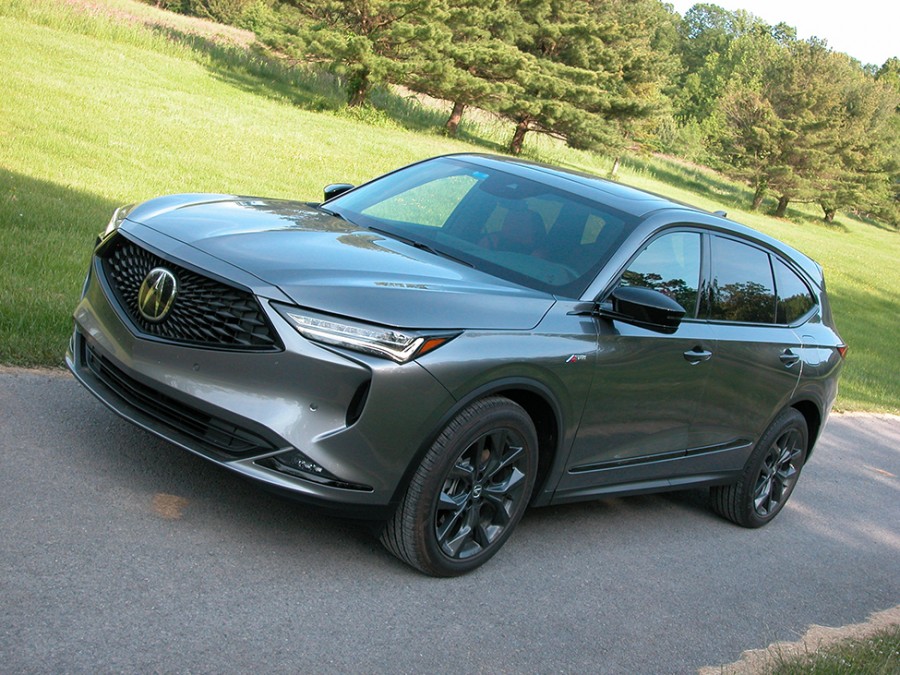 Aside from its suave and sculpted exterior edges, MDX’s interior is equally as eclectic. The test cars Lunar Silver exterior contrasted nicely with the A-Spec’s striking black and red leather seating and console that looks like it came from a LearJet with the exception of transmission selector buttons where jet engine throttles would reside.

More carmakers are using these electronic transmission gear selectors instead of a gear shift handle. In the MDX, the transmission gear shift switches are push/pull type. For example, for reverse you pull on the switch whereas park, neutral and drive are push switches. The A-Spec also came with paddle shifters for down and up-shifting the 10-speed automatic transmission.

To operate the 12-inch digital display, a large 6×4-inch touchpad resides on the console. It’s very sensitive to the touch and not easy to use while driving as it takes the eyes off the road. It’s used to access apps, navigation, the infotainment system plus Wi-Fi connectivity and then some.

On the vertical stack, that shares a spot with easy to operate HVAC controls, is a Dynamic Mode rotary switch for MDX’s five driving modes of Snow, Comfort, Normal, Sport and Individual. Selections are displayed on the infotainment screen as does audio and the rearview camera with multi-views. And they change color for each mode. For example, Sport mode turns the gauges to red for hot performance and the tach displays more prominently. Sport mode alters rpm’s, shift points and throttle adjustments.

As said, MDX’s digital gauge cluster offers a driver information display between the gauges and shows driving modes, alerts, functions and much more.

Step-in into the sumptuous and eye-grabbing cockpit is a low 18-inches. The heated/cooled front seats are very supportive and comfy with the added touch of sueded inserts. The steering wheel has a switch to activate “lane keep assist” feature keeps the MDX between the yellow/white lines and relieves turnpike/interstate driving fatigue. But you still need to keep at least one hand on the wheel.

Second row seats are equally as comfy with generous leg and headroom for two adults or three tweens. The second row seats tip and slide fore/aft for access to the third row seats which are mainly for small youngsters.

A low 31-inch liftover into the spacious cargo area makes loading heavy, bulky items easier. And with the third row seats upright, there’s 18.1 cubic feet of space that measures 22 inches deep, 44 wide and 29 high. Flip them and space increases to 48.4 cubic feet for 48.5 inches of depth. Flip the second row and capacity increases to 95.0 cubic feet for 81 inches of cargo loading depth. There’s also a 6-inch bin beneath the cargo floor to stow small items out of sight.

For 2022, MDX has a new powerplant. It’s 3.5-liter V6 generates 290-hp and 267 lb/ft of torque to move this luxury SUV’s 4,529 pound curb weight with ease. With auto start/stop engine technology, the 3.5L is EPA rated at 19 city, 25-highway mpg when coupled to the standard and smooth shifting 10-speed automatic transmission that comes with a 5,000-pound tow rating. There’s no want for power and acceleration from a standing stop or when passing 18 wheelers on the interstate.

MDX rides smoothly and quietly on Bridgestone 20-inch tires and with its new suspension that absorbs pock marked roads and tar strips with merely a ripple inside the cabin. It also parks easily with a relatively tight 40.5 foot turning radius.

With a lengthy list of standard safety features and amenities such as adaptive cruise, collision mitigation braking, forward collision warning, lane departure warning, lane keeping assist, road departure mitigation, traffic jam assist, panoramic sunroof, satellite radio and much more, MDX A-Spec had no extra cost options. Only a delivery charge of $1,025 took the base price of $57,100 to a bottom line of $58,125.

Along with that price comes a 6 year/70K powertrain warranty; 4/50K limited vehicle warranty and MDX needs no scheduled maintenance for 100,000 miles with the exception of state inspections or filling the windshield washer fluid.

Enter your email address to subscribe to this blog and receive notifications of new posts by email.