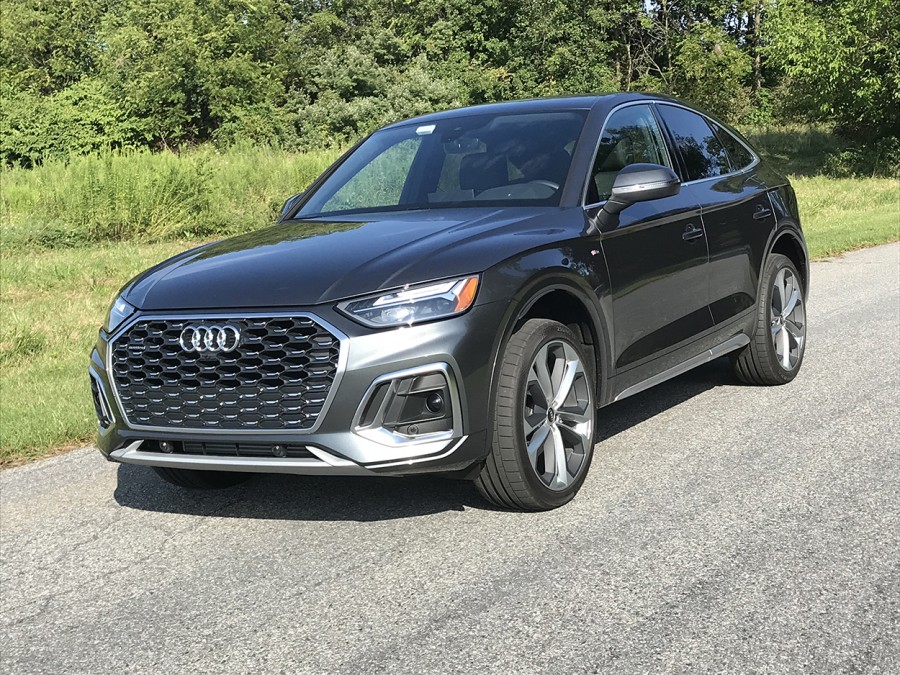 I have yet to drive an Audi I didn’t like. And their 2021 Q5 Sportback quattro (AWD) S-Line crossover is no exception.
Although it’s a crossover, the Q5 Sportback takes on a coupe design with its raked roofline that gives the impression it’s going 55 mph standing still.

And it is sporty and potent. Punch the throttle at 55 mph and you get pushed back in the seat. Its 2.0-liter, turbocharged inline 4-cylinder puts out 261-hp and 273 lb/ft of torque for EPA mileage estimates of an impressive 23 city, 28-highway mpg. Audi says it’s been clocked at 5.7 seconds for 0-60. Not bad for a 4,079-pound luxury SUV. And this hot four-banger carries an equally impressive tow rating of 4,400 pounds.

If this isn’t enough grunt for you, Audi ups the ante with their SQ5 Sportback powered by a 3.0-liter V6 producing a whopping 349-hp and 369 lb/ft of torque.

But power is not Q5’s only attribute. Offered in three trim levels of Premium, Premium Plus and Prestige, we were privileged to test the latter that also contained the optional ($1,400) Sport Package with sports suspension, aluminum Rhombus inlays, Nappa leather and 21-inch Continental tires.

After a mere 19-inch step-in into the cockpit, your eyes will be grabbed by the 10.1-inch iPad type display parked atop the dash. It serves the gamut of audio, navigation, rearview camera with front and overhead cameras, Apple CarPlay, Android Auto and more. And get this. Audi’s Integrated Toll Module is a toll transponder built into the rearview mirror. It allows a driver to access compatible toll road services in the U.S. and parts of Canada without the need for an externally mounted transponder (EZ-Pass).

Below the display are the easy to operate and view HVAC controls with selections displayable on the large screen. And below it are added function switches one of which is to switch off the engines auto start/stop feature plus the drive select switch for the five driving modes of off-road, comfort, auto, dynamic and individual.

On the other side of the dash is an all-digital instrument gauge cluster with a driver information display containing a host of alerts, operating functions and more.

A burly transmission shifter for the 7-speed automatic is similar to what you’d find in a single engine aircraft. For park gear engagement, there’s a “P” switch on the front of the handle. There’s also a console box top wireless phone charger.

Q5s nicely supportive and heated front seats have extended under thigh support that’s a welcome feature to have on long trips. Rear seats are also comfy for two adults although headroom is a bit tight for tall folks due to the sloping roofline. But leg room is sufficient provided the fronts aren’t racked well rearward.

With a low 28.5-inch lift-over into the cargo area, it’s rated at 25.55 cu./ft. with the rear seats upright. The area measures 37.5 inches deep, 44.5 wide and 31 high. Flip the rear seats and space increases to 54.06 cubic feet for 68 inches of cargo loading depth. Beneath the cargo floor is the spare tire that’s inset into a foam bin with two smaller bins offered for small item storage.

Shod with tall Continental 21-inch tires, Q5 rides smoothly, comfortably and quietly. Its suspension nicely soaks up road imperfections and unimproved railroad crossings. With a tight turning circle of 39.4 feet, Q5 parks ever so easily and it can be tossed in the turns with tenacious grip.

As an added incentive, Q5 comes with the government’s top five-star overall vehicle score, plus five for driver/passenger frontal crash, five for front/rear seat side crash and four for rollover. All impressive scores as the Q5 is itself.

For buyers who want a sports-

car but need the utility of a crossover and snowy weather traction, Q5 satisfies all those buying needs.

Next ArticleChevrolet’s Blazer RS is not too big or too small, but it’s just right for a sporty AWD SUV
Previous ArticleThe Genesis GV80 3.5T V6 is the new benchmark for AWD SUVs