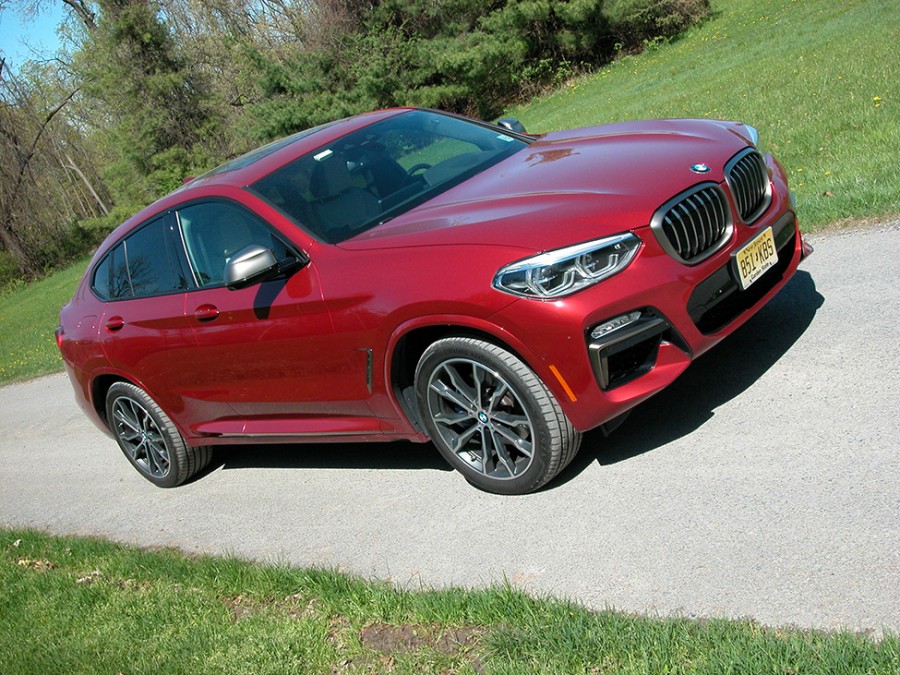 While BMW’s redesigned 2019 X4 is neither a crossover nor an SUV, we think it’s more of a Sports Activity Vehicle (SAV). Meaning it has the cargo capacity of a crossover with 8 inches of undercarriage clearance, but it lacks the multi-gear 4WD of a true SUV. Instead, it greatly favors a sports sedan in performance and handling. Hence to us, it’s an SAV. An exciting and compelling SAV.

The second generation X4, that’s positioned between BMWs X3 and X5 SUVs, can be had in two forms. As an xDrive30i and M40i that was tested.

The 30i comes powered by a 2.0-liter, inline turbo 4-cylinder with 248-hp and 258 lb/ft of torque for EPA mileage estimates of 22 city, 29-highway mpg. The more potent M40i gets a turbocharged 3.0-liter inline 6-cylinder that produces a whopping 355-hp and 365 lb/ft of torque for EPA’s of 20 city, 27-highway mpg with start-stop technology. Both engines get coupled to a slick shifting 8-speed automatic transmission with paddle shifters.

As expected from a BMW, especially the M version, hot acceleration gives a push-you-back-in-the-seat G-force sensation. Under full throttle and in Sport and Sport Plus mode, the engine achieves a full 7,000 rpm redline before it upshifts. In this mode, it adjusts shift points and when letting off the throttle the trapezoidal exhausts give off a delicious pop-pop, rumble, rumble backfire. Music to the ears.

In Sport Plus mode, the chassis gets a stiffer adjustment and the steering gets tauter for better control. Actually, X4 also offers Eco, Pro and Comfort modes. In Pro mode, the driver can select individual settings for best consumption and optimized tuning. So powered, X4 has been independently 0-60 tested at 4.6 seconds. A quick jaunt, don’t you think?

And get this, leave the car with the engine running and keyfob in your pocket, and the engine will automatically shut off. A good theft prevention measure.

The X4 M40i came with Dynamic Stability Control that offers Brake Drying, Brake Stand-By, Brake Fade Compensation and Start-Off Assistant (launch control). Yes, the M40i can be run on a track where it’s probably better suited than for off-road driving. To say the X4 M40i is a performance machine, is understated. It’s exhilarating and exciting.

But performance is not X4’s only trait. Step-in into its posh cabin is a mere 19 inches. Once you slip into and the ultra supportive leather seats with extended under thigh support and upholstered in Aluminum-Rhombicle material, you get a feeling of exquisite luxury and an array of the very best technology has to offer. Be forewarned, an intent study of the owners’ manual is a necessity as the X4 has a lot of features you have to get a handle on, particularly the tricky infotainment system.

The 10.25-inch, split-screen display that looks like an elongated iPad but with Wi-Fi hotspot capability, frontal and rear view cameras and a host of operations that have to be acclimated to. HVAC controls are easy to use but the transmission shifter needs some acclimation as well.

Back seats are Euro firm for three youngsters or two adults, provided the fronts aren’t racked well rearward. Ingress/egress into the backs could be easier if the doors would open a tad wider. And 6-foot plus folks need a bit of a head duck as the roofline slopes sharply.

The cargo area opens either with a fob or swiping a foot beneath the rear bumper if your hands are full of grocery bags. With the rear seats upright, there’s 18.5 cubic feet of space that measures 40 inches deep, 40 wide and 28 high. Flip the 60/40s and capacity increases to 50.5 cubic feet for 64 inches of cargo loading depth. The cargo area itself has sliding tie-downs and beneath the trunk floor is a felt lined bin for small item storage.

Now for ride and handling. Hey, it’s a BMW so expect and receive the best.

The ride and handling is on the taut side, especially in Sport and Sport Plus modes and that’s because the system tightens the suspension, steering effort and changes throttle control for spirited driving. Shod with Bridgestone 20-inch run-flat tires that are nine inches wide, the X4 gives a planted feel as if you can’t do anything wrong when throwing it into sharp turns and curvy roads. And you can’t help but notice the blue colored brake calipers of the M Sport brakes peeking from behind the slotted cast wheels.

Yes, it’s a lot of money but the X4 M40i is a lot of car. It’s an impressive compromise between a performance sedan and SAV that goes beyond the norm in this class.

Next ArticleChevy’s 2019 Blazer is one competent, sexy looking SUV
Previous ArticleNissan’s Kicks is a kick to drive and is very affordable and economical