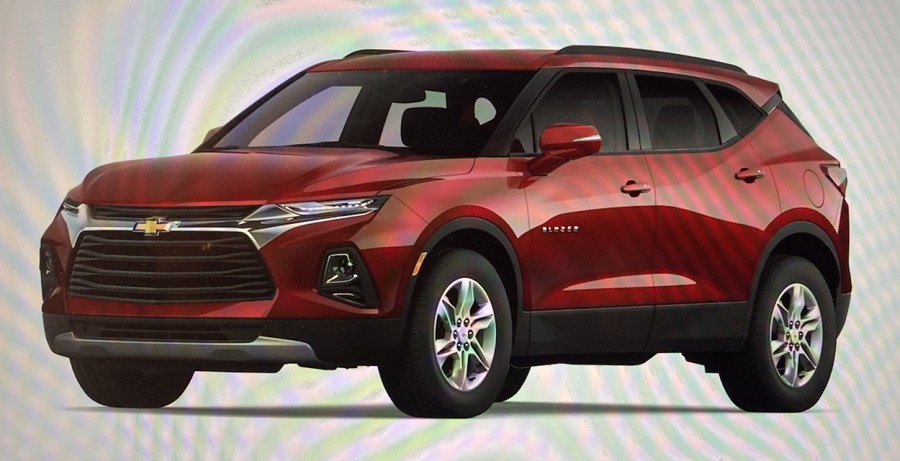 The Farmer’s Almanac is predicting that we may get several small snow storms this winter. So this may be a great time to check out an AWD SUV. And the one that has been around for some time then resurrected is Chevrolet’s Blazer.

The Blazer name goes back to the 80s when it was an S-10 in 2-door and 4-door form. At that time, the big three in its class were the Blazer, Ford Bronco II and original Jeep Cherokee.

But today’s midsize Blazer is a racy work of art with its chiseled styling lines and squint running lights with the actual headlights located midway down on either side of the grille. It resembles a hot Chevy Camaro coupe. And it slots between Chevy’s Equinox and three-row Traverse crossovers.

During our test week, Blazer grabbed a lot of eyes, be it at filling stations and shopping centers. It’s offered in FWD and AWD and in base L, Blazer LT, Blazer 2LT, Blazer 3LT, RS we tested, and top tier Premier. Of the group, the RS is the sportier version with its blacked-out grille, trim and glossy black wheels.

Blazer is offered with three engine choices. A 2.5-liter inline 4 producing 193-hp and 188 lb/ft of torque for EPA mileage estimates of 21 city, 27-highway mpg with FWD; 2.0-liter turbocharged inline-4 with 227-hp and 258 lb/ft of torque for EPAs of 22/27 with AWD; and tested 3.6-liter, V6 with 308-hp and 270 lb/ft of torque with EPA’s of 19/26 mpg when coupled with GM’s 9-speed automatic transmission that comes standard with each engine. These numbers are helped somewhat by start/stop technology. The V6, however, is only offered with AWD and is optional on the LT trim.

Full throttle acceleration with the V6 is a push-you-back-in-the-seat affair. Passing 18-wheelers on an interstate is a breeze.

Blazer RS’s interior is also racy. Gray leather seats had red contrasting stitching on all seams and steering wheel. The comfy, heated/cooled, perforated leather seats also had the red trim theme peeking through the tiny aeration holes to allow the cooling feature to cool the torso. The outboard rear seats were also heated.

On the dash is an 8-inch touchscreen/infotainment display with voice recognition, that serves not only the audio, apps, Wi-Fi 4G connectivity, Apple CarPlay/Android Auto, but the rearview camera that offers five different views including Surround (360 degree) and Trailer Hitch, the latter makes backing up to a trailer and your ball hitch easier. Major HVAC controls are selected on the 8-inch touchscreen with A/C and defrosters controlled by tiny buttons below the display. At the bottom of the stack, is a convenient wireless smartphone charger.

And get this. If using the Remote Start feature in winter, the heated front seats will turn on automatically. And if encountering an obstacle in front of the vehicle, the drivers’ seat bottom vibrates as a warning. Then there’s the round red air outlet vents that appear to come directly from the Camaro. They are unique in that a mere twist right or left raises or lowers the interior temperature settings.

As to Blazers’ AWD system, it consists of 2WD, AWD, Sport, Tow and Off-Road modes. All selectable by a rotary console switch. In Off-Road mode, the system modifies accelerator pedal response, directs AWD torque to all four wheels, affects the Traction Control System and the StabiliTrak/ESC system for improved traction. Despite this, and with a low 7.4 inches of undercarriage clearance, Blazer is not ideally suited for rugged off roads. It’s more for modest snow depths, icy roads, rain slicked roads, shallow mud and sand.

Step-in into the back seats, (that slide and recline) is a low 19-inches. However, very tall folks need to do a head duck because of the sloping roofline. The seats can comfortably accommodate two adults with decent leg room, or three tweens.
In the cargo area, the RS trim version had a nifty adjustable cargo management system consisting of a set of aluminum bars that slide fore and aft to hold grocery bags close to the powered tailgate, or farther inward to hold larger items. Plastic grocery bag handles can be tied to the rails to avoid spillage.

With the rear seats upright, there’s 30.5 cubic feet of cargo space that measures 39-5 inches deep, 45 wide and 29 high. Flip the seatbacks and space increases to 64.2 cubes for 70 inches of cargo loading depth.

Beneath the cargo floor are two 5.5-inch deep bins on either side of the space saver tire, suitable for small item storage. Lift over into the cargo deck is an easy 29.5 inches.

As for the ride on Micheline 20-inch tires, it’s smooth with the suspension soaking up major bumps, tar strips and roadway pock marks. The ride is generally quiet with some wind noise at highway speeds.

Steering effort is a tad on the taut side, but considering Blazer’s heft, it remains completely manageable. There’s nary any body lean in sharp, tight turns and Blazer exhibits a planted feeling.

This price begins creeping into the luxury market of BMW, Benz, Lexus and other comparable competitors. If you can forego a host of RS’ amenity items, the Blazer LT may be a more affordable choice.


Despite this, consideration should be given to Blazer RS’ impressive government five-star safety ratings. It achieved an overall score of a full five stars; five for driver frontal crash/four for passenger; five for front/rear seat side crash; and four for rollover. Add to this a 3year/36K bumper-bumper and 5/60K powertrain warranty with roadside assistance and courtesy transportation and Blazer is a compelling SUV.