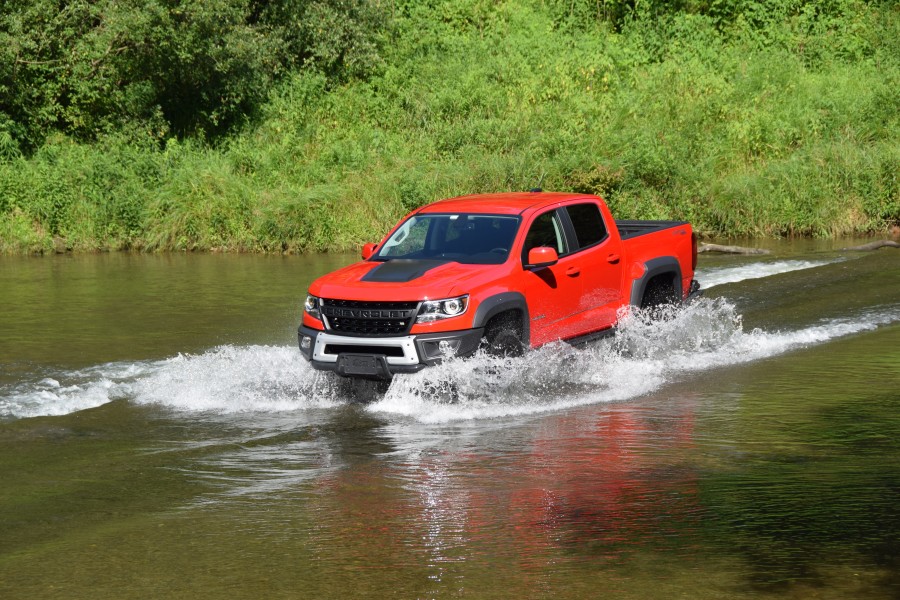 Chevrolet’s hot-selling Colorado midsize pickup went one up on the competition when they debuted their Colorado Bison ZR2 4WD pickup. This brawny pickup is not your ordinary midsize in that it’s intended for serious off-roads – if that’s your need to traverse or place to play. It differs from the standard Colorado as it comes with front and rear locking differentials for added traction that adds to its already capable 4WD off-road chops.

But that’s not all. Chevy partnered with aftermarket 4×4 builder American Expedition Vehicles (AEV) based in Missoula, Montana, who designed and built five hot-stamped boron skid plates to protect the oil pan, fuel tank, transfer case and front/rear differentials. They add the ultimate protection with less weight than steel or aluminum, and are less prone to gouging according to Chevy.

Bison is offered in Extended Cab with 6’2” box and Crew Cab that we tested with a 5’2” box.

With the 3.6L, it was independently tested at 7.0 seconds for 0-60, which isn’t too shabby for a pickup with a curb weight of 4,745 pounds and a GVWR of 6,000 pounds. The combination of engine and trans carries an EPA estimated 16 city, 18-highway mpg fuel economy rating. Far from miserly, but consider what it does, where it can go and tow (5,000 lbs). What’s nice about it, and despite its’ off-road capability, it’s a comfy daily driver, albeit with a bit of tire hum with its large, deep treaded tires.

Incidentally, for you serious off-roaders, an OEM snorkel, for dusty roads and deep water, can be attached, but Chevy may be offering one as well.

Those traits, along with a stiffer suspension gives Bison a taut, but controllable ride with positive handling.

Bison’s interior is upscale with leather, heated/cooled front seats, heated steering wheel and an 8-inch touchscreen with a host of apps including Apple CarPlay/Android Auto that serves the rearview camera, satellite radio and has 4G LTE Wi-Fi hotspot connectivity. And, a convenient wireless smartphone charger is situated in front of the console box. The touchscreen also serves the Hitch Guidance System that helps the driver align the receiver hitch to a trailer.

As we tested the Crew Cab, step-in was 25 inches or 20.5 to the rock rails on either side. The rear seatbacks flip down on the bottoms for flat storage and they split and fold up against the bulkhead exposing a handy full-width bin for small items and a larger inside storage area.

On Bison’s exterior, the front bumper is winch-ready and attaches to tubular wrap-around bumpers to protect the trucks’ sides and bumpers when negotiating tight, brushy and rocky trails. Chevy also included a tailgate that can be locked/unlocked via the key fob.

With an extremely long list of standard convenience items and safety items that includes a trailer brake controller, Bison’s base price comes in at $42,900. Add to that the ZR2 Bison Package ($5,750) and delivery ($1,095) and the bottom line reflected $46,745.

If you’re into off-roading be it for rock hopping, outback camping, fishing or hunting, but also need a sensible daily driver, check out Chevy’s Bison. It’s one especially capable and striking hauler.

Next ArticleToyota’s 2019 C-HR subcompact crossover, has edgy styling and sporty handling
Previous ArticleWith a host of enhancements and AWD, Mazda3 is a compelling sedan/hatchback