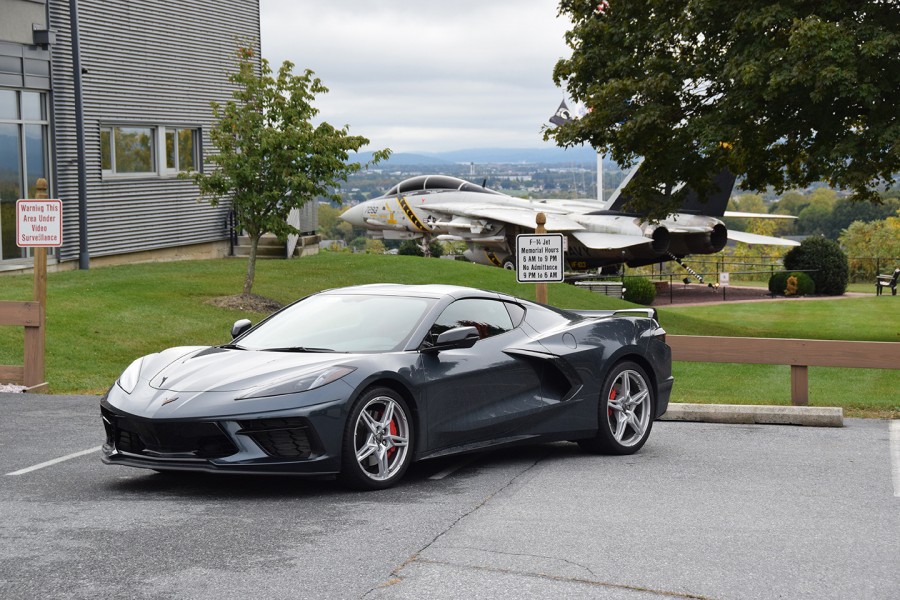 Before its debut it was the most talked about, speculated, anticipated, debated car, and now it’s here. Chevy’s first mid-engine Corvette Stingray.

After a week behind the wheel there is only two words to describe it – “totally awesome” – and then some.

In this its 8th generation, there was speculation as to weather die-hard Vette fans would accept the mid-engine design, a big departure from Corvettes’ front engine powerhouses over its 67-year inception. Well, once they drive one, they won’t want to go back to front engine models as the new Stingray is far superior handling wise. The mid-engine puts added weight over the rear wheels that gives improved balance, added traction that allows the Vette to do 0-60 in less than three seconds with the Z51 package. It also handles severe road twisties with ease. Throw it into a tight turn and it sticks with no body lean or dipping. It remains planted no matter the sharpness of the bend. Turn the steering wheel an inch either way and the nose points 20 degree’s accordingly. It’s that quick and precise. And it doesn’t take racing skills to handle this superb handling.

At first sight, Stingray could be mistaken for an Italian super car with the likes of a Ferrari, Lambo or McLaren. And a couple neighbors who saw it, thought it was.

Stingray is offered in base 1LT, 2LT, 3LT and a convertible with power folding top. We tested the LT2 that comes with removable targa-type roof panels. It’s a true American sports car.

So let’s slip into this super car and onto its Recaro type seats that are offered in GT1, GT2 and Competition Sport. At first you’ll notice the door handles are hidden underneath door sculpted overhangs – for lack of a better name. The next sight that grabs the eyes is the almost square steering wheel with paddle shifters. Then you’ll notice there’s no shift handle. Nope. Merely push buttons for the extra quick shifting 8-speed, dual clutch automatic transmission. Under full throttle this trans changes gears faster than possible with a manual trans and power shift (for non-drag racers, that’s shifting without leaving off the throttle). An added benefit is there’s no worry in blowing the clutch – or engine by over-revving in a missed shift.

Then there’s the 8-inch iPad type display that serves a host of functions including the rearview camera, Apple CarPlay, Android Auto, Bose audio, Amazon Alexa, Spotify, Glympse, Wi-Fi Hotspot connectivity, infotainment system, climate selections and a myriad of special informational gauges. New owners need to sit in the car with the owners manual and study it profusely for there’s a lot to learn about this iconic two-seater that happened to earn Motor Trends Car of the Year award.

Other interior design locations are the HVAC controls that are uniquely mounted along a narrow strip between the Recaro type seats. And a large 12-inch long all digital instrument cluster emphasizes the tach as it displays either vehicle speed or gear position centered within it, depended on the driving mode selected. It also displays a G-force gauge and 0-60 times among a host of others. It’s all driver focused as is the 8-inch vertical stack display.

On the console and next to the trans shifter is a rotary controller with wrist pad that selects most display functions including driving modes of Weather, Tour, Sport and Track modes. There are also two auxiliary modes of My Mode (for driver configurable settings) and Z mode that is activated by a “Z” button on the steering wheel that allows adjusting the engine and trans settings. Stingrays’ exhaust tone also changes as Tour mode has a relatively tamer sound while Sport has a throatier sound as engine rpm’s increase by 500.

And get this. There’s a Performance Data Recorder that employs a high-def camera to record race track circuit times and in auto-record mode, serves as a dash cam every time the engine is running. This is a feature all vehicles should offer.
Pop the hood and there’s a deep bin measuring 22x23x17 inches for stowing an airline spec rollie bag or two small duffel bags. There’s another 12.6 cubic foot bin measuring 53×14.5×12 inches in the rear behind the engine that serves two purposes. Chevy says a golf bag can be stowed there or the roof panels that have holders to secure it. It’s here upon opening the hatch, that the 6.2-liter, dual overhead cam V8 exhibits a beautiful sight cradled in its body mounts.
It generates 495-hp and 470 lb/ft of torque. When coupled to the 8-speed dual-clutch auto trans, it earns EPA mileage estimates of 15 city, 27-highway mpg. Chevy says gears 2 through 6 keeps engine rpm near its power peak while 7 through 8 are for long distance cruising.

This powertrain in a 3,366-pound fiberglass body produces goose bumps and wide smiles when flooring the accelerator from a standing stop. Especially so when engaging line-lock for push-you-back-in-the-seat, explosive, catapulting acceleration. The rumble from the V8 behind the seats is exhilarating to say the least.

Despite its terrific performance, Stingray can still be a daily driver except in snow or freezing rain. It’s questionable whether snow tires would help.

Stingray rides on 20-inch Michelin tires in the rear that are 12 inches wide, and 19 inchers in the front that are 8 inches wide. So shod and with a coil spring suspension, the ride is firm but comfortable. Need more softness? Opt for the magnetic ride control ($1,895) feature.

Speaking of options, there are a host of them that can drive up the amazing and unbelievable base price of $58, 690 for the LT2 that was tested. To that price was added the Z51 performance package ($5,000) that includes performance brakes, performance exhaust, performance suspension, performance rear axle ratio, limited slip differential, Z51 rear spoiler, HD cooling system, high-performance run flat tires; Bright Red brake calipers ($595); carbon flash metallic painted outside mirrors; along with delivery ($1,095) that took the bottom line to $85,690. Still a compelling price that is much less than others such as Porsches, Lambo’s, McLarens and especially Ferrari’s. In comparison, Stingray is a bargain.


From the time I was in the Army at Fort Knox in ‘66 and took a used Vette at a Chevy dealer for a ride knowing I couldn’t afford one on PFC pay, until today, the Stingray has always been my favorite car. The only drawback to the test car was that I had to give it back.