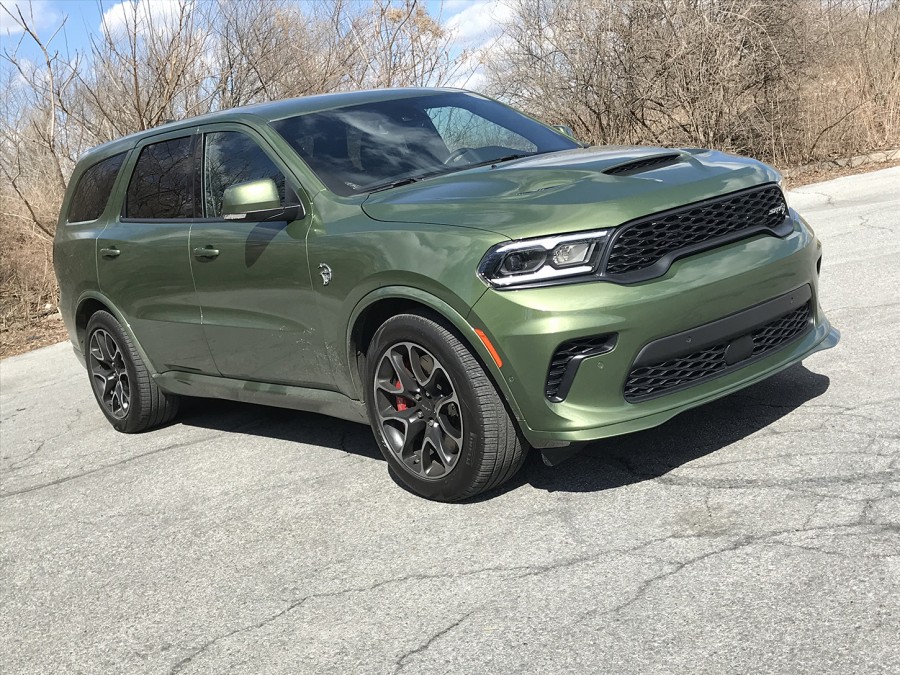 Leave it to Dodge to create the world’s most powerful, three-row, family oriented AWD SUV.

Dodge’s Durango SRT SUV powered by their potent 6.2-liter HEMI Hellcat supercharged V8 engine, generates a thundering 710-hp and 645 lb/ft of torque that can propel this 5,710-pound American muscle car to an exceptionally quick 3.5 seconds for a 0-60 sprint with launch control.

Performance is exhilarating. To activate this, merely press the launch control button on the dash, hold down the power-adjustable brake pedal, press the accelerator to the floor, then release the brake and the Hellcat launches ahead while pushing you back in the seat, quickening your pulse and forcing a wide smile on the face. The first time doing this, is scary as it has so much G-force grunt. So equipped, Durango should do good at the drag strip, despite its heft of a wagon.

Don’t laugh at that. Back in the late 60s there was a 1962 white Pontiac Bonneville (supposedly stock) V8 powered station wagon with automatic transmission called “The Milkwagon,” so named because its owner had Rietz’s ice cream stand in Schnecksville. Reitz ran local drag races and cleaned-up in the cars’ C/SA class. And that was because of the great traction he got with the added weight of the cargo area over the rear posi-traction rear wheels. He always beat me in my mothers’ 1968 Pontiac Bonneville sedan (she never knew I raced it). Even with a spot, he blew off more powerful higher-classed cars who spun their tires on the starting line.

In this day when many car makers, on up to our federal government, are pushing electric vehicles (actually that’s a misnomer as they’re really battery powered vehicles just like flashlights aren’t called electric flashlights) on us, Dodge gets kudo’s, accolades and thousands of way-to-go’s for debuting an exciting SUV like this.

Push the keyless ignition to light-up the HEMI engine and you get goose bumps from the delicious sounds of supercharger whine emanating from under the hood, and at the opposite end, exhaust tips that put out a rumble that’s music to a gear-heads’ ears. And despite all this quick grunt, Durango SRT Hellcat can tow up to an impressive 8,700 pounds. The only drawback is it’s not kind at the gasoline pumps as it carries EPA fuel economy ratings of 12 city, 17-highway mpg. But hey, the exciting driving experience is well worth it.

The spacious second row captain’s chairs are separated by a huge console and they slide forward to ease ingress/egress into the third-row seats that are mainly for youngsters. All totaled, Durango is rated for seven passengers. And the backs of the second row had optional video screens to keep the kids occupied during long trips.

After a low 30-inch liftover into the cargo area and with the third row seats upright, there’s 17.2 cubic feet of space that measures 18.5 inches deep, 45 wide and 32 high. Fold the third row and capacity increases to 43.3 cubic feet for 48 inches of cargo loading depth. With the second row folded, there’s 85.1 cubic feet for 80 inches of loading depth. And beneath the aft cargo floor is a 6-inch deep bin for small item storage.

As for Durango’s AWD system with a limited-slip rear differential, it assists in keeping the tall Pirelli 20-inch tires on the pavement, and in snow. The torque split in Auto mode is 40/60, Snow-Tow is 50/50 and Sport is set up for maximum rear-wheel acceleration at 35/65.

This brings up ride and handling for this family hauler. It’s suspension with Bilstein shocks firms up body roll allowing it to take sharp turns and cloverleafs with virtually no lean while keeping a planted stance. And all four wheels are shod with famed Brembo brakes to insure short stops. Despite the added firmness, ride quality is smooth and with seven aboard, even softer.

Now for the good part. The Durango SRT Hellcat AWD can be yours for a mere $92,746 after a base of $80,995. This includes a host of standard equipment such as heated/cooled front seats and steering wheel, heated second row seats, performance hood with functional air scoops, ParkSense front/rear park assist with auto stop and much more.

One major problem though. The initial build of 2,000 Durango’s were sold out within a week of debut. Because of a huge demand, Dodge has reconsidered and will build a few more. But don’t wait. They won’t last long. It’s a one of a kind, exciting family SUV that you’ll keep for a long time – maybe it’ll even be a collectable. I hated to give it back.