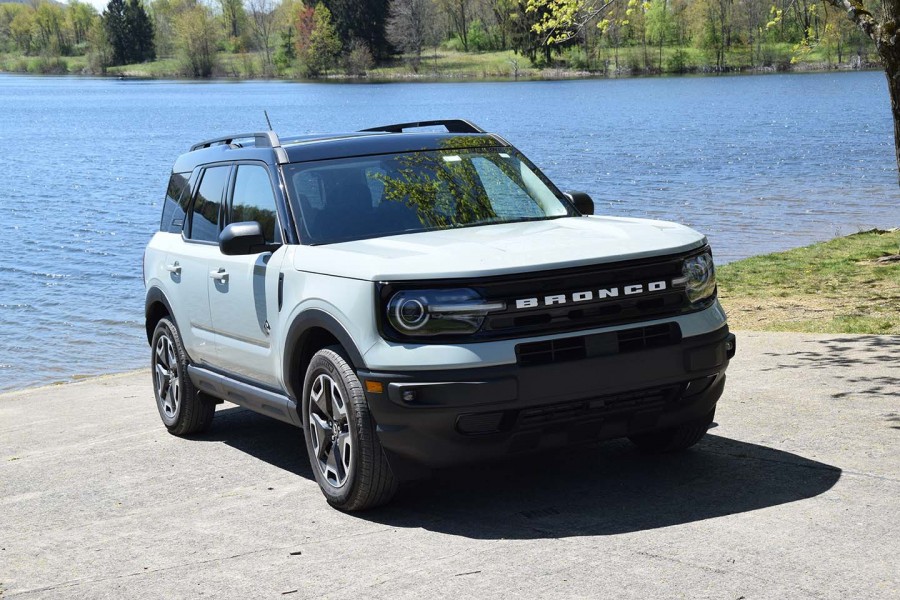 The last time I drove a Ford Bronco it was a subcompact Bronco II SUV, and it was over some white-knuckle terrain of the Red Rocks of Utah that Ford had invited automotive journalists to for a long-lead introduction of their newest SUV.

Although that was several years ago, I remember when Playboy’s automotive columnist at the time, almost lost one of several Bronco II test vehicles, and possibly himself during a ride-and-drive demo which was intended to be a true test of Bronco IIs off-road ability.

Each journalist drove a Bronco II down an almost 90-degree downslope of a smooth, slippery red rock. I was fortunate to have an automatic transmission Bronco II so the hairy trek down this three-car length rock was easy since I could ride the brakes all the way down. But the Playboy magazine journalist had a manual shift Bronco II and when he released the clutch the vehicle sped way too fast down the rock as it appeared he lost control and was heading for a crash. Somehow, he managed to lay heavily on the brakes and maintained steering control to stop safely down the flatter part of the rock as we all scattered out of the way.

After driving Ford’s all newly designed 2021 Bronco Sport SUV, only the name has stayed the same as this resurrected Bronco has even better off-road chops than its predecessor of yesteryear.

For one, it’s larger in size which makes for a better ride and handling. It parks easily, is fun to drive and during my weeklong test, it grabbed a lot of eyes.

Bronco is offered in two versions. There’s the robust off-road Bronco with two or four doors and the Bronco Sport 4-door. We tested the Bronco Sport Outer Banks version although Bronco can also be had in Base, Big Bend, Badlands and First Edition models.

Within the Outer Banks model, it came standard with a 1.5-liter three-cylinder. Yes, you read right. A three-cylinder that generates 181-hp and 190 lb/ft of torque for EPA mileage estimates of 26 city, 25-highway mpg with engine start/stop technology. It couples to a standard 8-speed automatic transmission with rotary gear selector.

There’s an optional 2.0-liter 4-cylinder that puts out 245-hp and 275 lb/ft of torque, also with an 8-speed auto transmission and start/stop feature.

So configured, the Outer Banks carries a maximum tow capacity of 2,000 pounds. With a ground clearance of 7.9 inches, Ford says Bronco Sport can ford up to 17.7 inches of water.

Off-road wise, it has an approach angle of 21.7 degrees and departure angle of 30.7 degrees, allowing it to tackle some modestly tough terrain.

Need more capability? The Bronco has even better specs for serious off-roaders, of course at a larger price.

Bronco Sports’ 4WD system is called G.O.A.T. (Goes Over Any Terrain) that adjusts throttle input and transmission shift points depending on the mode selected. In the Bronco Sport it’s Normal, Eco, Sport, Slippery and Sand. In Sport mode it increased engine rpms by 500 although performance wise, the difference between it and Normal weren’t that noticeable.

Speaking of performance, the little 3-banger had a linear application of power and torque. It was independently timed at 8.2 seconds for a 0-60 sprint. Not bad for a heavy (3,593 pound) SUV.

After a comfortable 18-inch step-in into the Sports’ interior, you’re treated to comfy and nicely supportive heated perforated leatherette and cloth front seats and sufficiently padded rear seats. Thanks to its boxy design, Bronco Sport had gobs of head, leg and should room fore and aft.

An 8-inch touchscreen serves the audio, rearview camera, apps like Travel Link and more. A front view camera view would be nice since Bronco Sport’s hood line is high and squared which the camera would allow checking the terrain or objects in front of the vehicle.

HVAC controls are large and easy to view and use. And below them is a wireless phone charger.

Bronco’s spacious cargo area has a rubberized cargo floor and a MOLLE system of straps for easy retrieval of baggage or gear. There’s also deep, zippered pockets behind the front seat backs.

With the rear seats upright, the cargo area measured 34.5 inches deep, 42.5 wide and 34 high. Flip the 60/40 seatbacks and cargo loading depth increases to 64 inches. Ford says Sport can accommodate a pair of upright mountain bikes (with the front wheels off and stowed). The cargo underfloor holds the spare and around it small items can be stowed in dense foam bins.

Equally impressive is that Ford designers included a separate opening rear hatch window. I had that on my ’98 Ford Explorer Sport and it was especially handy when carrying lengthy items through the open window. Lift-over into the cargo area is a comfortable 29.5 inches which makes loading heavy, bulky items easier.

Bronco Sport came with a myriad of standard features like active grille shutters, LED headlamps and taillamps, wireless phone charger, Sync3 infotainment system, tire pressure monitoring system, perimeter alarm, Ford CoPilot360 and much more. Actually, there were no extra cost options only a delivery charge of $1,495 that took the base price of $26,660 to $28,155. And this price comes with a perfect crash test score from the Insurance Institute for Highway Safety.

Ford just announced a price increase on several models which included the Bronco that adds $540 to the bottom line.

After a recent chip shortage, Bronco’s are now coming off the production line to a waiting list of 125,000 in-hand orders in the U.S. alone. So if you want one, better see your Blue Oval dealer now.

Bronco is an exciting new vehicle for Ford, plus they also look cool and macho.

Next ArticleFord’s top selling F-150 for 43 years, got even better with a hybrid powertrain and novel enhancements
Previous ArticleFord’s F250 Super Duty, 3/4 ton pickup is a civilized, serious workhorse