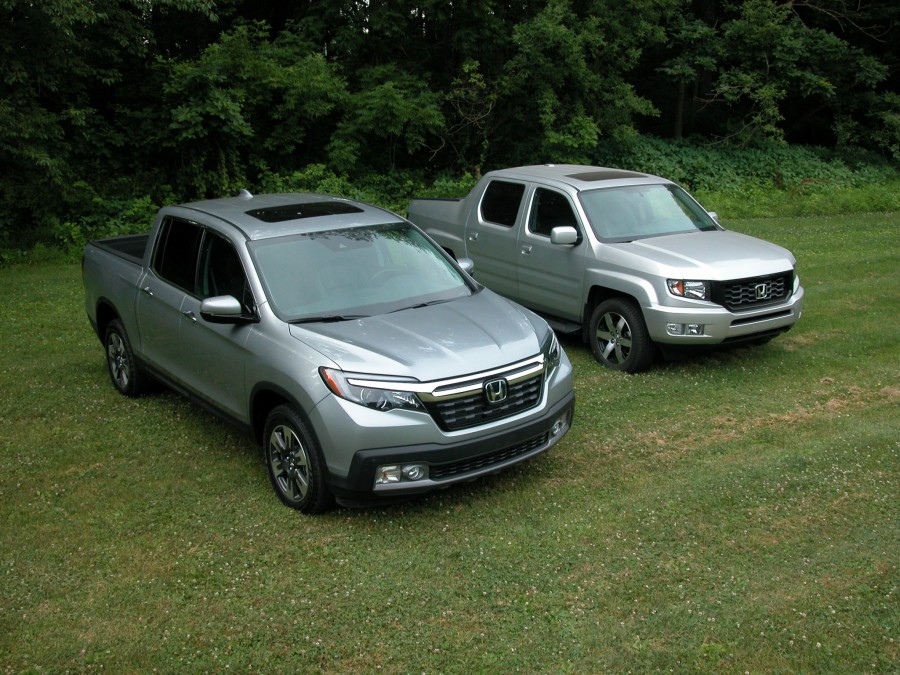 After a two-year hiatus, Honda’s 2017 Ridgeline midsize AWD (also offered in 2WD) pickup is totally new. But before we get into this review, be advised we own a 2014 Ridgeline but promise to remain impartial, and perhaps even more critical. For 2017, gone is the flying buttress back end on earlier models that we still like because it’s …. different. Reminds us of the old Chevy El Camino and Ford Ranchero that were cars of yesteryear with cargo beds. The new Ridgeline, however, looks more truck-like, but doesn’t ride or handle like one. In fact, it is the best riding midsize (even full-size) pickup on the market. Ridgeline is offered in RT, RTS, Sport, RTL, RTL-T, RTL-E and Black Edition, the latter sports a blacked-out grille and other dark trim items.

Built off Honda’s Pilot SUV platform, Ridgeline has much beefier underpinnings than the Pilot. And it needs to. With its 4,515-pound curb weight, 1,499 payload and 5,000-pound tow capacity, it’s almost, well, truck-like. Chevy’s Colorado/GMC’s Canyon midsize trucks, for example, have 2,000 pounds more tow capacity and both are more off-road capable with a higher than Ridgeline’s 7.87-inch undercarriage clearance. In Honda’s research, over 90 percent of truck buyers don’t take their trucks off-road, nor do they need more than 5,000-pound tow capacity, which is equivalent to small utility trailers, boats and campers. Ridgeline excels at what most folks need, mainly an occasional trip to Home Depot/Lowe’s where the Ridgeline’s bed can handle the full width of a 4×8 sheet of plywood (is 5.25 inches wider than 2014 model), bagged mulch, shrubbery even paving stones as the cargo bed is made of dent-proof composite. We might add here that the bed is now 2.75 inches longer over the 2014 model (59.75 vs. 57) and deeper (16.5 vs 15.75). It appears Honda narrowed the rear doors to accommodate this extra length (35.5 inches vs. 40 for the 2014). As such, getting into the cavernous back seat isn’t as wide as it is on earlier models.

There are two items that make Ridgeline unique among all pickups. For one, its tailgate swings out and drops down. Since we owned ours, the gate hasn’t been dropped more than twice, and that was for extra long loads. The swing out gate allows easier loading/unloading and it’s a feature we love. Then there’s the ultra unique underfloor lockable trunk that is now unlocked/locked via the keyfob instead of the ignition key. Rated at 7.3 cu/ft., it can hold as much, maybe even more than many typically-sized car trunks. A space saving spare resides on an upper level of the trunk floor as does the jack. Only drawback here is that the forward portion of the bed must be free of a load to open the trunk lid to access them. Another enhancement is the 3.5L V6 that was in the 2014 model now has more power and torque. The 2017 V6 produces 280-hp (vs 250 for 2014) and 262 lb/ft of torque (vs 247 lb/ft). The difference is noticeable as the increase can readily be felt and it’s now EPA rated at 18 city, 25 mpg versus the 2014s 15/21 mpg rating. Of course this increase comes with a 6-speed automatic transmission versus a 5-speed in the 2014 and an Eco mode provides cylinder deactivation. With the 2014s, its AWD system had a “lock” switch that could lock in that mode up to 18 mph in low gear. The 2017 now offers AWD modes of Normal, Snow, Mud and Sand, all displayed on the drivers’ information panel. Other transaxle changes include moving the transmission shifter to the console that now has one big box instead of an open box with a hidden compartment and a bin of sorts on the floor for a purse or other small items. Step-in into the cabin is an easy 20 inches where you’ll find Pilot type accommodations. The 8-inch touchscreen display (and a 4.2-inch drivers’ info display) appears to be identical to that in the Pilot, Civic and perhaps the Accord. It serves the nav system, HondaLink infotainment (Apple CarPlay, Pandora, Android) and rearview camera that now gives a wide view, normal view and above view. Some of the functions are not easy to use, especially while driving. Another noticeable and major redesign is the sloping, shortened hood (36.75 inches vs. 42 on 2014’s). It gives a much better road view compared to the squared and high hood on earlier models.

Ridgeline’s backseat offers comfy seating for three. The seats split 60/40 and fold against the bulkhead that opens a huge storage area with a 55-inch width. Large enough to carry a boxed 50-inch flatscreen TV. It is the largest second row seat area of any midsize truck plus there’s 2.9 cubic feet of space beneath the seats when they’re down. With an optional tech package you’ll get lane keeping, blind-spot monitoring, adaptive cruise, forward collision warning and auto braking. Since it has yet to be safety rated, these options should give it good numbers. As for ride, it’s sedan-like, quiet and unlike any pickup be it midsize or full-size. That in itself sets it apart from the others. Handling too is exceptional with a light steering effort that transmits controlled handling in sharp turns and when making quick turning maneuvers. With a very long list of standard features, there were no optional charges on the test truck with the exception of $900 for delivery. As such, the Ridgeline RTL-E priced out at $41,370. About $7,000 more than a 2014 Sport model. Of course the price increase reflects all the technical goodies included that were not available on 2014 models. Since its debut in 2005, this latest model advances on making it more of a truck that caters to people who don’t need a conventional full-size, work truck.