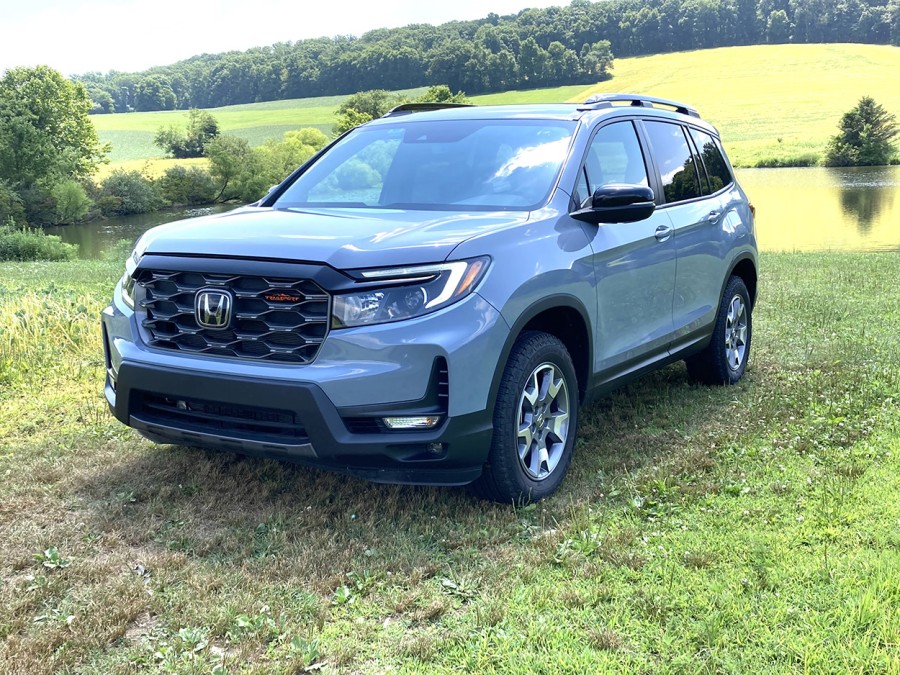 With more carmakers introducing off-road oriented crossovers and SUVs to their existing lines, Honda has followed suit with their already popular Passport SUV as it’s now offered as an AWD TrailSport model.

The 2022 Passport TrailSport has styling changes that exude a more rugged look. Aside from special orange badging both on the exterior and interior, Trailsports’ track was increased by 10 mm for a wider stance and added stability when off the beaten paths. Added too were front/rear bumpers that resemble skid plates plus large 5-inch wide dual exhaust pipe extensions for a touch of sportiness.

Operationally, Honda’s standard torque-vectoring all-wheel drive system apportions 22 percent of torque to the rear wheels when the going gets sticky, and an 8.1-inch ground clearance helps when traversing mild off-roads and deep snow.

Other features include a heated windshield wiper plus a park feature to keep them from sticking during ice and snow conditions, power folding outside mirrors for when the trail narrows, and it’s shod with nine-inch wide off-road oriented Firestone tires.

TrailSport’s interior is exceptionally pleasing with its 8-inch infotainment system that offers Apple CarPlay, Android Auto apps, premium audio system, navigation with three rear views including a hitch view that helps when backing up to a trailer.
Absent is a handle gear selector. Instead, the 9-speed automatic transmission is controlled by push buttons for Park, Neutral and Drive gears, but Reverse requires an upwards tug. Paddle shifters are included for drivers who want added control.

Flush mounted HVAC controls are nicely arranged and simple to view and use. Below them is a wireless phone charger on the forward console. And the spacious console box itself has a 13×7.5-inch sliding top that can serve as a work station.

A simple mode switch offers Normal, Snow, Mud and Sand modes and there’s a separate Eco mode switch but doesn’t include a Sport mode. More importantly, the TrailSport doesn’t have an AWD Lock mode for when traction gets difficult in snow and mud. My Honda Ridgeline pickup has a VTM 4-Lock mode so I’m surprised Honda didn’t include it on the TrailSport that’s intended as an off-trail SUV.

Over on the 7-inch digital gauge cluster, it displays a host of details including driver information for functions and alerts with the latter offering a bright orange “BRAKE” warning when an obstruction is sensed.

A 20-inch step-in into the heavily padded rear seats offer an abundance of leg and head room for two adults or three small youngsters.

With a 32-inch lift-over into the cargo area, the area is spacious and rated at 50.5 cubic feet with the rear seats upright that measures 43 inches deep, 48 wide and 31.5 high. Flip the rear seatbacks by pressing two buttons and space expands to 77.5 cubic feet for an impressive 76 inches of cargo loading depth. That’s slightly over six feet of space for a lot of gear, even a mountain bike with the front wheel removed and stacked atop the bike. Beneath the cargo floor are two 7-inch deep bins for small items storage that shares the space with a space saver tire, jack and tools.

Passport TrailSport gets its grunt from a standard 3.5-liter, V6 that produces 280-hp and 262 lb/ft of torque for EPA mileage estimates of 19 city, 24-highway mpg with the standard 9-speed automatic transmission. Included is remote start on the keyfob that’s nice to have on cold mornings. The 3.5L is a quiet and proven engine and one that’s in my Ridgeline pickup as well as other Honda’s. So powered, it carries a tow rating of up to 5,000 pounds which is enough for a pop-up camper, a 14-foot boat or a utility trailer.

Ride wise, and like all Honda crossovers/SUVs and pickup, it’s car-like. With 18-inch Firestone tires, the ride is smooth even on back country bumpy, unimproved roads. It handles exceptionally secure and planted in hair-pin turns with negligible body lean.

TrailSport came loaded with a host of standard features including a moonroof. On the standard safety side, it has blind spot monitor w/rear cross traffic alert, collision mitigation braking, lane keeping assist, road departure mitigation, tire pressure monitoring and considerably more. There was only one extra cost option and that was for Sonic Gray paint ($395) that took the base price of $42,470 to $44,090 with delivery.

TrailSport came with impressive top government 5-star safety ratings of five for an overall score; five for driver frontal crash, four for passenger; five each for front/rear seat side crash; and four for rollover.

If you don’t need a third-row seat and do some off-the-beaten path exploring for hunting, fishing, camping sites, Honda’s Passport TrailSport is not only a good-looking SUV, but a capable one as well.