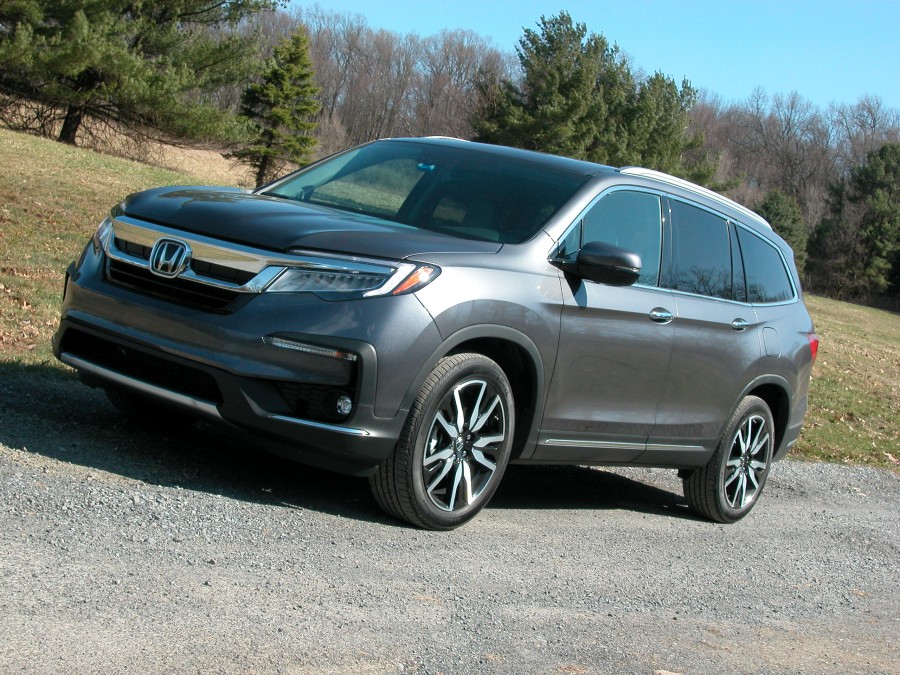 Honda’s Pilot has been the company’s perpetual good seller and is known to be the benchmark for midsize crossovers. And for 2019, Pilot was upgraded with an improved 9-speed automatic transmission, standard advanced safety features, revised infotainment system and a hands-free liftgate that requires a swish of a foot beneath the rear bumper.

The three row Pilot is a versatile crossover boasting a roomy interior, excellent ride and increased fuel economy for its class.

Pilot is offered in FWD and AWD and in five trim levels of LX, EX, EX-L, Touring and tested Elite.
Pilot can be had with seating for eight or seven, the latter is standard on Elite and optional on Touring. The one seat difference is that captain’s chairs replace a bench seat that is standard on the other trim levels.
As the top-shelf model, the Elite trim comes standard with dual sunroof, leather seating, 20-inch wheels and an 8-inch touchscreen as opposed to a 5-incher on lesser models, to name a few.

The Elite came loaded with a host of safety and convenience features. One of which is Honda’s Sensing System that automatically applies the brakes when sensing an imminent collision. It also has lane keeping assist and active cruise control.

Then there’s Cabin Control and CabinTalk. The former lets passengers and driver change climate controls and audio selections with a smartphone app. The latter allows the driver to talk to their children through their wireless headphones when they’re watching the standard Blue-Ray DVD rear entertainment system.

Approaching the Pilot with the vehicle’s keyfob on you and the doors will unlock automatically from 5-feet away. And they’ll automatically lock when walking away.

With a comfortable 20-inch step-in and over a 7-inch sill, Elites’ interior is upscale. Your eyes will be drawn to the automatic transmission shifter on the console. It’s a push button affair with park gear requiring a push of the P switch and for reverse, the R button requires it be pulled backward. It takes a little getting used to. Standard paddle shifters allow some shifting for yourself that is handy to down-shift on downhill’s, instead of riding the brakes.

Perforated leather seating is soft and comfy and that includes the third row that is mainly for kids as leg room is tight.

Pilots’ AWD system uses active center and rear differentials that send torque/traction to the wheels that is needed the most. The selectable system offers Snow, Sand and Mud modes. With an undercarriage clearance of 7.3 inches, Pilot can handle mild off-road terrain and modest snow depths.

Access to the third row seat is rather easy as the second row captain’s seats power forward but must be manually slid backward.

The cargo area with the third row seats upright is rated at 16.0 cubic feet. It measures 20 inches deep, 48 wide and 31.25 high. Flip them and the second row seats and cargo capacity expands to 82.1 cubic, offering 80 inches of cargo loading depth. That’s a whopping 6.6 feet.

All Pilot’s are powered by a 3.5-liter V6 with 280-hp and 262 lb./ft. of torque for EPA mileage estimates of 19 city, 26-highway mpg. This is helped somewhat with auto start/stop that shuts down the engine at idle. As such, it carries an impressive tow rating of 5,000 pounds (3,500 with FWD) and has sufficient gusto that has been independently 0-60 tested at 7 seconds. Not bad considering it’s a heavy crossover/SUV weighing 4,319 pounds.

Ride wise on Continental 20-inch tires is smooth and quiet. It handles quite nimbly with a relatively tight turning radius of 39.4 feet. That makes it a breeze to park in tight spots. With its inherent stability control, Pilot hugs sharp turns with confidence.

With an extremely long and extensive list of the most desired features and safety items, the Pilot Elite had no extra cost items. It was priced at $48,020 with delivery and a full tank of fuel. That’s about the competitive price of comparable crossovers, only Pilot offers a bit more, for less.

Our son previously owned a Pilot, but traded up to an Acura MDX, Honda’s luxury brand, as it was a natural progression for more luxury, while remaining true to Honda’s heritage of quality construction.

Next ArticleChevy’s 2019 Tahoe is a long-standing, proven and robust 3-row SUV
Previous ArticleCadillac enters the small crossover market with their classy XT4