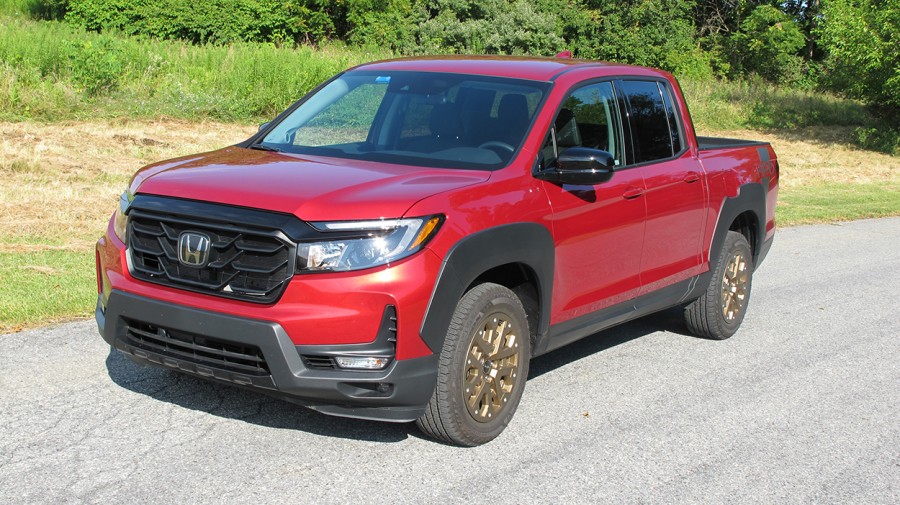 Honda’s 2021 Ridgeline pickup is, without a doubt, the best riding pickup on the market. Perhaps that’s because it’s based on Honda’s top selling Pilot SUV.

But before we get into this review, be advised we own a 2014 Ridgeline, but promise to remain impartial, and perhaps even more critical.

Back in 2017, Honda redesigned the Ridgeline by removing the flying buttress back end on earlier models that I have and like because it reminds me of the old Chevy El Camino and Ford Ranchero, cars of yesteryear with cargo beds. The new Ridgeline, however, looks more truck-like, but doesn’t ride or handle like one.

For 2021, Ridgeline midsize pickup has made AWD as standard, includes an improved infotainment system and offers the new HPD (Honda Performance Division) package that adds details to give it an enhanced performance look. It’s offered in Sport, RTL, RTL-E and Black Edition trim levels. We tested the Sport which is the trim model we have.

Ridgeline rides so smoothly because it’s built on a unibody platform like the Pilot with softer underpinnings. But that doesn’t mean it’s a whimp as it can tow up to 5,000 pounds and carries a max payload of 1,580 pounds. It’s also a quiet rider with added sound deadening. And it parks easily with a 43.4 foot turning radius

There are two impressive features that sold me on the Ridgeline and that are found on the 2021 model. First is the swing-out tailgate. Since I bought it new, I may have used the flip down gate maybe three or four times. Two of those were to haul our sons’ freshly cut 12-foot Christmas tree and a new hot-tub cover. For all other times, I use the swing-out feature as it makes loading/unloading so much easier and also when climbing into the bed to secure a load.

The second feature is the 18-inch deep, in-bed locking trunk that has plugged drain holes for when using it as an ice-laden beverage cooler. While I have to use a key to unlock the trunk on my Ridgeline, it can be unlocked via the keyfob on the 2021. One of many nice enhancements.

The composite (dent and corrosion resistant and doesn’t need a spray-in liner) bed itself measures 64×50 inches and has an easy 35-inch load height with the gate dropped down or swung to the side. The bed can carry a 4-foot sheet of plywood with the tailgate open, or prop the end of the sheet over the closed tailgate.

Inside the cockpit, and onto the comfy, supportive cloth front seats, the first thing I noticed during my initial drive in the 2021, was the gearshift for the 9-speed automatic transmission. It’s four electronic push buttons with P, R, N, D/S gear selections. It took a little getting used to coming from my column shifter. But the button switches are easy with the Reverse gear being a pull switch. Honda also included paddle shifters.

A separate AWD Mode switch selects the systems Normal, Snow, Mud and Sand modes for specific driving conditions that my truck doesn’t have. The improved system can send 70 percent of engine power/torque to the rear wheels when needed.

At the top of the stack is an 8-inch display embedded with Honda Link infotainment system requires the use of a smartphone for various apps, including Apple CarPlay, Android Auto and Wi-Fi connectivity. Features my Ridgeline doesn’t have.
I was surprised though that Honda engineers didn’t use the pad at the base of the vertical stack for a wireless phone charger. But there are receptacles for wired charging.

After a low 20-inch step-in, Ridgeline’s 60/40 split-folding back seat can comfortably seat three adults with gobs of head and leg room. Pull two handles and the bottoms automatically flip up against the bulkhead for 2.9 cu/ft of protected flat floor load space.

The 2021 Ridgeline’s robust 3.5-liter V6 with 280-hp and 262 lb/ft of torque earns EPA mileage estimates of 18 city, 24-highway mpg. Much improved mileage over my Ridgeline’s powertrain. One factor contributing to this is the 2021 comes with cylinder deactivation, start/stop function for improved fuel consumption. There’s also an Econ mode switch that when engaged, helps improve fuel economy by adjusting engine and climate control systems. Another feature absent on my truck.

So powered, acceleration from a standing stop is a linear explosion of power as is highway passing situations. There’s no want for power, even with four aboard.

With a low 7.64 inches of ground clearance, Ridgeline is not a bona fide off-roader, but merely suitable for mild trails and modest snow depths.

Ridgeline’s base price of $36,490 increased after adding Radiant Red paint ($396) and HPD package ($2,800) that included fender flares, alloy wheels and special badging that took the bottom line to $40,880 with delivery.

For those who need a pickup truck with modest payload and towing capacities and one that is a comfortable, smooth rider that doubles as a daily driver, look no further than Honda’s Ridgeline. It’s a compelling truck like no other. I love mine.

Next ArticleThe Genesis GV80 3.5T V6 is the new benchmark for AWD SUVs
Previous ArticleToyota’s 2021 Land Cruiser is a legend among SUVs with its inherent off-road prowess