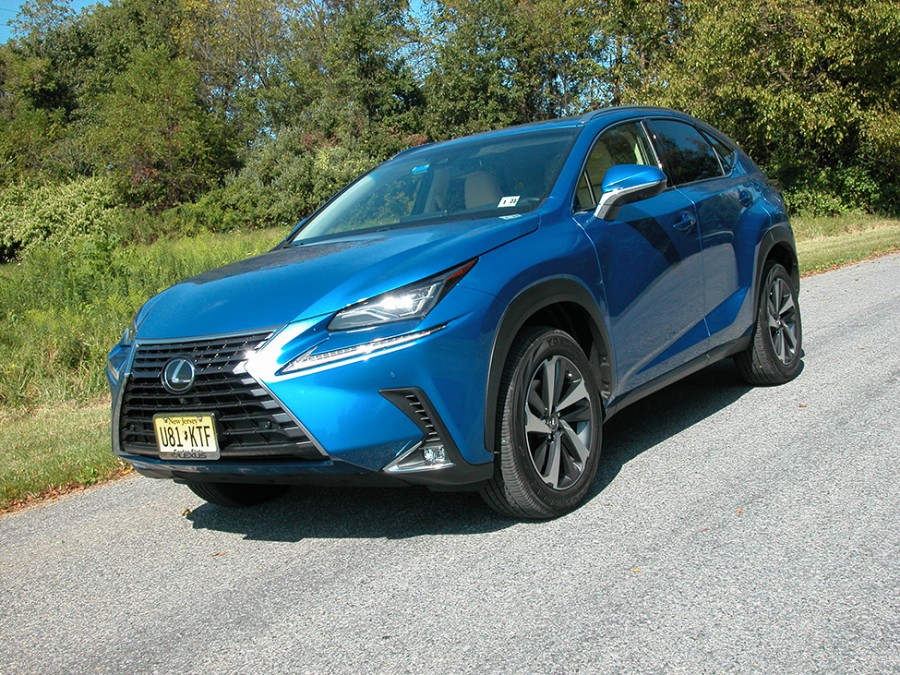 As a spin-off of its best selling midsize RX 350 SUV, Lexus has cloned its fine attributes in a bit smaller package that goes by the product name of NX 300.

The NX 300 is a compact Luxury SUV that has the sculpted exterior styling lines of the RX 300. Put both vehicles side by side and the familiarity is obvious. As the old saying goes, imitation is the first sign of success, so the NX should sell extremely well for those not in need of a larger SUV, but want all the capabilities, qualities and amenities of the RX.

The five-passenger NX is offered in NX 300 and NX 300 F Sport, the latter is the sportier version for livelier performance and handling. There’s also an NX 300h with the “h” representing a hybrid version.

NX 300’s interior is eclectic in design with a vertical stack that flows downward into a console resembling what you’d find in a corporate jet. In the test car, a two-tone color theme with contrasting stitching contrasted deliciously with the NuLuxe simulated leather seating (front seats are heated/cooled) that sported perforated inserts and sensible lateral support.

Atop the dash resides a 10.3-inch display that takes most of its commands from a touch pad on the console. It’s probably the only item we weren’t crazy about since it’s super sensitive (touchy) and should not be used while driving. Perhaps a pure touchscreen would be safer. But it does have Google voice control and voice command for Siri Eyes Free.

The screen did have an especially neat feature. In rearview camera mode, the view can be rotated around the vehicle for a true surround view. And a variety of apps are offered including Apple CarPlay/Amazon Alexa, but all are connected via Lexus’ Enform Suite with Wi-Fi.

HVAC controls are dash buttons with selections displayed on the display plus they can be adjusted there as well.
A rotary dial above the touchpad provides three driving modes of Eco, Normal and Sport, the latter alters engine rpm, transmission shift points and suspension tautness.

Of significance that a lot of comparable SUVs/crossovers don’t provide is an AWD lock. If getting stuck in mud or deep snow, the system distributes torque to the rear wheels and cancels out when vehicle speed exceeds 25 mph, enough to get the vehicle out of a stuck condition.

After a low 18-inch step-in into the cabin, rear seat passengers have adequate leg and ample head room. Two adults or three youngsters can comfortably be accommodated.

As for the NX 300’s powertrain, it comes standard with a 2.0-liter, turbocharged four-cylinder that generates235-hp and 258 lb/ft of torque. The engine is coupled to a smooth and quick shifting 6-speed automatic transmission. The combination garners EPA mileage estimates of 22 city, 28-highway mpg. So powered, the duo carries a tow rating of 2,000 pounds and was independently 0-60 timed at 7.3 seconds, not a head snapper, but has good around town acceleration and when merging onto rush hour highway traffic.

I might add that the engine is quiet as is the ride on Yokohama 18-inch tires. And smooth, as are all Lexus vehicles as the suspension easily soaks up nasty road imperfections. Parking too is easy since steering effort lightens, then tightens as speeds increase where you want more road feel. A nice combination.

Handling wise, the body has a tad of lean in sharp tight turns, but stability remains intact throughout maneuvers.
Back in the cargo area, and with the rear seatbacks upright, there’s 17.7 cubic feet of storage space that measures 37 inched deep, 40.5 wide and 27 high. Press two buttons and the second row seats power fold upon which cargo space increases to 54.6 cubic feet for 70 inches of cargo loading depth.

And beneath the cargo floor is a three partition foam bin for small item storage. NX 300 also has a low 30-inch lift-over into the cargo hold.

The NX 300 comes standard with an extremely long list of standard features, amenities and safety items. And the options list is almost as long, albeit pricey. The NX 300 started life a $37,785 and that’s where the bargain ended. What drove the price skyward was the Luxury Package that tagged on an extra $4,705 that included a myriad of much desired features too long to list. Lesser charges such as the navigation system with 10.3-inch screen adds, $1,850, triple beam LED headlamps ($1,515), navigation system w/10.3-inch display ($1,460), panoramic backup monitor ($800) and seven other options with the least expensive being $10 for key gloves. With a delivery charge of $1,025, the bottom line reflected $50,863.

With that, buyers get impressive government 5-star safety ratings. It was awarded five stars as an overall vehicle score; four each for driver/passenger frontal crash; five each for front/rear seat side crash and four for rollover.


And as with all Lexus vehicles, you get quality, dependability and high resale values that Lexus vehicle are known for.