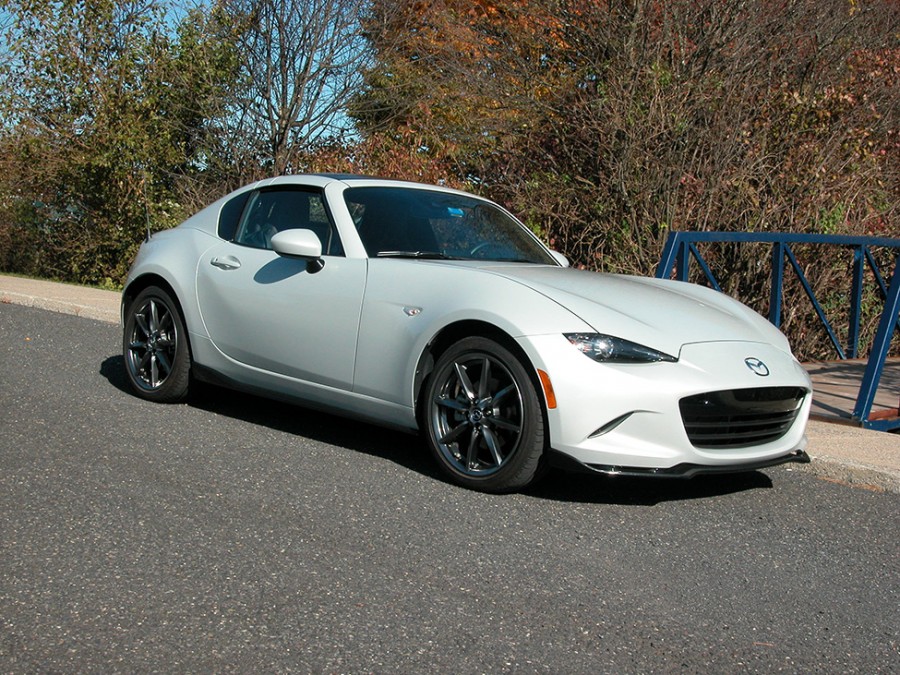 If there’s one affordable roadster that has stood the test of time, it’s Mazda’s Miata. With more than a million units sold, this iconic, rear-drive roadster is a Guinness Record holder for the best selling two-selling two-seater sports car for over 30 years.

With the RF’s top up, the latter takes on a sexy fastback look. The hardtop goes up and down in a mere 13 seconds, and is the model of choice here in the Snowbelt where it’s an economical, daily driver. But only when the roads are free of snow – although the RF comes with a limited slip rear differential.

The Mazda MX-5 RF gets its grunt from a 2.0-liter, inline 4-cylinder that generates 181-hp and 151 lb/ft of torque. Coupled to either a 6-speed automatic or 6-speed manual, the latter earns EPA mileage estimates of 26 city, 34-highway mpg. With a curb weight of 2,453 pounds, the RF has spirited acceleration and passing power. And the 6-speed manual shifter is quick albeit a bit notchy. It mates with a light pressure clutch making the duo fun to drive.

Like more expensive cars when opening/closing the doors, Miata’s windows automatically dip down/up a half-inch for a tight seal.

The cockpit is on the snug side with heated and supportive seats. Perched atop the dash is a 7-inch display with rearview camera and apps that are controlled by a rotary mouse on the console.

Because of the small interior confines, cup holders are oddly placed. One was on the passenger side of the console so it doesn’t interfere with shifting motion, while the other is at the rear of the console by the console box that is mounted vertically.

MX-5’s gauge set had digital gas and fuel gauges, but the speedometer and tach are analog dials. There’s also a round driver information display to the left of the tachometer. We especially liked the faux carbon fiber trim on the door armrests and the large rotary HVAC controls.

Trunk space is rated at 4.48 cubic inches and is sufficient for a medium duffle or small rollie bag. The regular MX-5s offers a trite larger trunk at 4.59 cubes.

Ride wise on Bridgestone 17-inch tires is decent but road imperfections can be felt. A short wheelbase contributes to this as does the optional Sport Tuned suspension with Bilstein shocks. So equipped, MX-5 RF shines on twisty and sharp turns where there’s nary any body lean. This roadster is meant to be driven in a sporty manner and it excels when doing so.
We were impressed that the windshield and roof didn’t shimmy or shake on rough roads or when encountering railroad crossings. And there was a fair amount of road feel in the steering wheel. As expected the MX-5 parks easily and has quick steering.

Option wise, an appearance package, sport tuned suspension, stainless door sill plates, rear bumper skirt and spoiler added $2,725. With delivery ($920) the bottom line reflected $36,980 nicely equipped. A base Sport model can be had for $26,580. A Brembo brake package adds $4,670 to the base price.

With top-down weather upcoming, the attractive MX-5 would make a fun-to-drive topless sportster that can transform into an all-weather vehicle in 13 seconds.