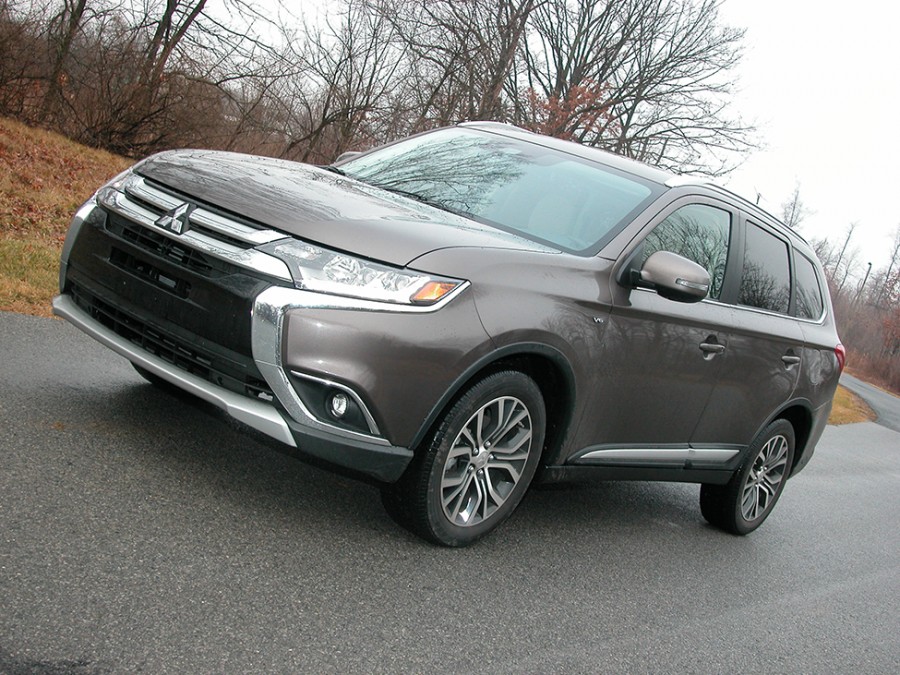 Offered in ES, SE, SEL and GT and in FWD and AWD, we tested the latter that comes standard with a 3.0-liter, 224-hp (215 lb/ft of torque) V6 and conventional 6-speed automatic transmission. Other models get a 2.4-liter, 166-hp (162 lb/ft of torque) four-cylinder that pairs with a CVT transmission.

As for the V6, it’s peppy, but under hard acceleration it shows its hefty weight (3,610 pounds). As such, EPA mileage estimates are on the low side of 20 city, 27-highway mpg.

Acceleration wise, the combination was independently tested at 7.6 seconds for 0-60. So powered, Outlander carries an impressive 3,500-pound tow rating.

After a mere 18-inch step-in, Outlander GT’s interior came with perforated leather seating. The front seats are nicely supportive and comfy while the rears are equally as comfy and offer ample leg and headroom. Third row seats, however, are mainly for kids as legroom is scant and getting in back there is a squeeze.

The vertical stack is nicely laid out with a 7-inch display featuring Apple CarPlay/Android Auto, smartphone integration, apps, XM radio, Bluetooth, rearview camera, nav, all of which are highlighted by glossy black plastic trim that doesn’t look cheap. In fact, it enhances the nicely padded and robust steering wheel. A smaller driver’s information display between the speedometer and tach gives warnings and other pertinent information.

While many SUVs or crossovers have a single AWD mode, Outlander’s takes it further. Their S-AWC (Super All Wheel Control) system has a rotary dial on the console to select AWC Eco, Normal, Snow and Lock. A sub-control of 4WD Lock sends torque to the rear wheels, while 4WD Auto distributes torque to each wheel that is controlled by automatically depending on driving conditions. 4WD Eco is the most fuel efficient mode in that it’s always in 2WD but 4WD will engage when sensing wheel slip.

Back in the cargo area measuring 14 inches deep, 40 wide and 32 high (10.3 cubic feet), flipping the third row seat opens up tor 39 inches of depth (34.2 cubes). Flip the second row and there’s 68 inches (63.3 cubic feet) of storage length. Now here’s the problem. Folding the third row seats is easy but their headrests must be removed and stored in a shallow bin of the cargo floor so they can fold flat. But when folding the second row, the seat bottoms must first be pulled up then the backs folded down behind them. A two-step manual operation when some competitors have a one-step flip/fold operation. Then there are pricier vehicles that offer powered folding seats. An easier, quicker operation though would be preferred.

Shod with 18-inch Toyo tires, Outlander rides smoothly and quietly. It handles exceptionally well in sharp turns as it remains stable and planted with no tippy feeling. It parks easily and has a relatively tight turning radius of 34.8 feet.

Its off-road prowess is fairly good provided it’s mild off-roading. With an 8.5-inch undercarriage clearance, which is lower than Jeep’s Cherokee (its main competitor) at 8.7, Jeep’s Wrangler at 9.7 and the high-stanced Wrangler Rubicon at 10 inches. But for most folks purposes, Outlander can do just fine in snow, sand or shallow mud.
Outlander GT came with folding outside mirrors when shutting down the ignition and a powered Liftgate. Actually the Outlander GT came loaded with most desired features and safety considerations with the only option being the Touring Package ($1,500) that included the multi-view camera, forward collision mitigation, adaptive cruise control, lane departure warning, automatic high beam and heated steering wheel. Add that to the base price of $31,695 and delivery of $895 for a modest $34,090 bottom line. A reasonable price for a content laden SUV.

But Outlander has two more outstanding traits. One is the 10/100K, 5/60K, 7/100K and 5/Unlimited warranties. The other is a full five-star overall government safety rating; four for driver frontal crash, five for passenger; and five for front/rear seat side crash. All commendable safety ratings.
If you’d prefer a bit smaller SUV, Outlander is also available as an Outlander Sport with an overall length of 172 inches versus Outlander’s 185.