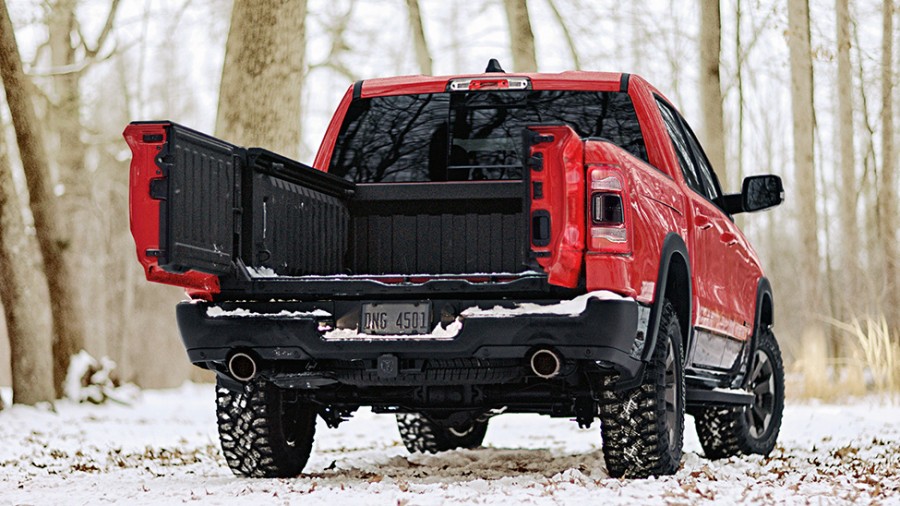 For 2019 Ram trucks has gone two-up on the competition with their announcement of their Multifunction tailgate and a more powerful Heavy Duty 2500/3500 diesel line.

Ram’s unique 60/40 Multifunction tailgate is an answer to GMC’s Multipro tailgate. But Ram’s appears to be better in that is can be used in its swing-away fully opened split position with a trailer in tow, as a conventional fully dampened drop-down tailgate with remote release option, or, with either the 60 side opened or just the 40 side. And the tailgate has a 2,000-lb load rating.

The Multifunction tailgate carries an option price of $795 and a nifty pull-out bed access step is $295.
The other Ram news is that its 2500/3500 HD trucks with high-ouput 6.7-liter Cummins inline 6 turbo diesel engine now puts out a class leading 1,000 lb/ft of torque and 400-hp. Otherwise the non- high output diesel generates 370-hp and 850 lb/ft of torque.

For those who need heavy towing, the high-output diesel looks like it can pull a house trailer off its foundation.

Next ArticlePowerful, fuel efficient and fun-to-drive are all qualities of VWs Golf R hatchback
Previous ArticleSubaru’s 2019 Forester is destined to be a top seller in the compact SUV market