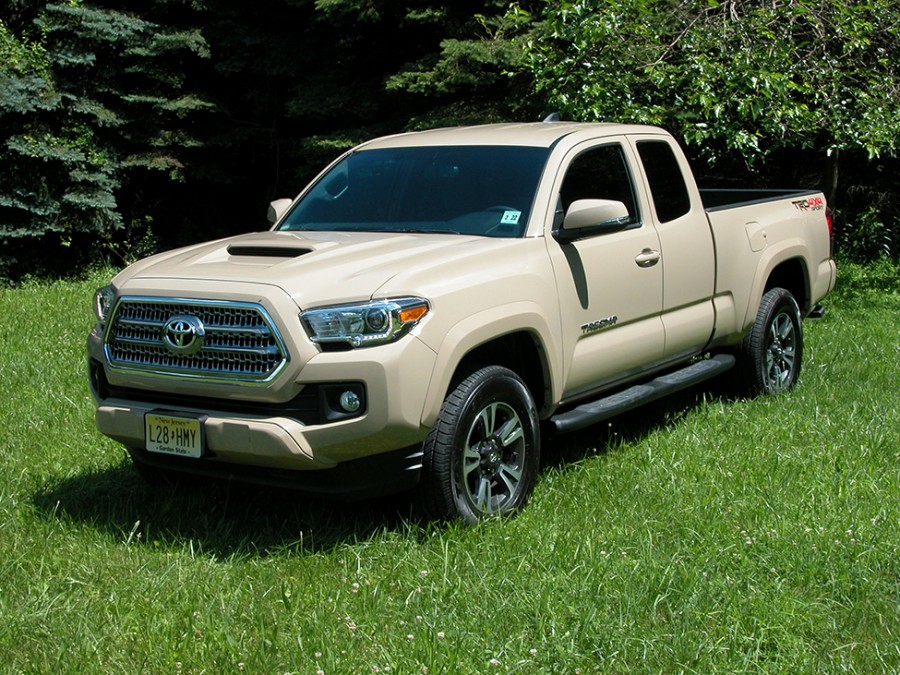 Toyota’s Tacoma has been the top selling midsize pickup over the past several years. In fact, the truck had virtually no competition until Chevy introduced their Colorado. And now Ford has decided to resurrect their Ranger midsize so that may be affect Tacoma’s sales. But the truck has had a tremendous following as there are far more of them on the road then Toyota’s full-size Tundra pickup.

For 2017, Tacoma has been pasteurized and homogenized to the point it’s a quieter and better riding than earlier models. Why change what it working so well? But the only changes made were minor and include a sliding rear window and the return of the TRD Off-Road V6 4WD to the line-up, that includes the entry level SR, SR5, TRD Sport and Limited.

We tested the Access Cab Sport model that has two swing back rear half doors. Most Tacoma’s sold are full four door Crew Cab models, but the Access Cab is fine if you don’t expect to carry lots of company. The cabs’ small rear jump seats fold up against the bulkhead and will suffice for very short trips, or two kids. But they’re not very comfy nor is there a lot of legroom.

The test truck was powered by 3.5-liter V6 that produces 278-hp and 265 lb/ft of torque. Power gets routed to the wheels via 6-speed manual transmission that was EPA mileage estimated at 17 city, 21-highway mpg. With the manual trans, acceleration was spirited for a 4,305-pound truck, and came with a clutch lock that allows the vehicle to be driven out of difficult situations by cranking the engine with the clutch engaged. It’s designed to keep the starter motor from operating if the clutch is not fully engaged.

If you insist on better fuel economy, Tacoma is also offered with a 2.7L, inline 4-cylinder that puts out 159-hp for EPA mileage ratings of 19/21 mpg with the manual trans. If you’re going to tow anything, the V6 is advisable as it’s tow rated for 6,500 pounds. You can never have enough tow power.

Step-in into the nicely furnished cabin is a tall 23 inches or 16.75 to the step rails. Once in, the cloth covered seats are soft and comfy with just the right amount of lateral support. Instrumentation is simple and easy to use. Nothing fancy here, but Tacoma did come with a wireless smartphone charger on the lower part of the vertical stack.

4WD selection comes via a rotary dial for the typical 2H, 4H, 4L gearing. This is in addition to an electronic Automatic Limited Slip Differential that functions, says Toyota, like a mechanical limited slip diff when activated at low speeds.
A 7-inch touchscreen display serves the audio, navigation and rearview camera systems. Above it, and mounted on the top portion of the windshield, is a GoPro camera mount (the camera was absent for fear it would be stolen), a nicety to record your off-road jaunts or road-raged drivers.

With a high commanding forward view, the hood scoop gives the truck a sporty look, but detracts somewhat from a full frontal view. It’s really not needed but comes as part of that trim model.

Back in the 6 foot (72.5 inches) cargo bed, it has an inner bed made from a sheet molded composite deck and durable walls that are 10-percent lighter than steel. The bed also comes with four tie-down hooks and detents that allow two-tier loading.

If you’re really into serious off-roading, the TRD Off-Road 4X4 is for you as is has knobby tires, Bilstein shocks, locking rear differential and crawl control. If this isn’t enough, the Tacoma TRD Pro adds all of the above plus Fox bypass shocks with longer extension travel, a taller, wider stance for more stability over rough and tough terrain.

Ride and handling have improved over the last Tacoma we tested. The ride on Toyo Open Country 17-inch tires was smooth on highways and surefooted off-road. The wheels are mounted with six, not five, lug nuts. Since the Toyo’s were all-weather type tires, there wasn’t any tire hum on highways as would be typical of knobby off-road rubber. And handling was good with only a smidgen of body roll that kept the truck tracking true and secure.

Tacoma also comes with a 36 month/36K mile basic warranty, 60 month/60K powertrain warranty and an unlimited mileage corrosion warranty which is understandable since a few years back, earlier model Tacoma’s experienced frame rust in which Toyota footed the bill for dealer replacement of them.

Despite all the new competition from Chevy and Ford, Tacoma should maintain its popularity among midsize pickups.