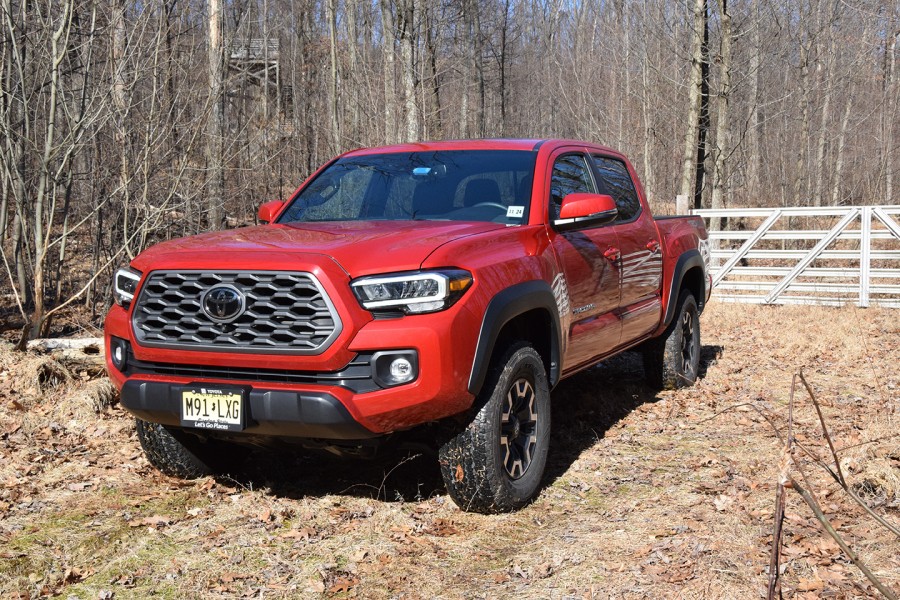 Toyota’s Tacoma pickup has been the best-selling midsize pickup 13 years in a row. And with more competition coming from Chevy’s Colorado and Ford’s Ranger, Tacoma isn’t resting on its laurels. Tacoma has been enhanced with enhanced safety technology and new off-road oriented models developed from Toyota’s Racing Development (TRD) desert racing trucks.

Tacoma is offered in SR, SR5, TRD Sport, TRD Off-Road, TRD Pro and Limited. We were privileged to test the TRD Off-Road version and as its name implies, is outfitted for serious off-roading adventures.

Off-Road comes standard with the traditional 2H, 4H and 4L 4WD gearing, and with Crawl Control wherein the driver can select up to five low-speed settings to better and safely negotiate precarious off-roads. Hill Start and Multi-Terrain Select adds to its prowess as does Active Traction Control.

But the most significant new feature on the Off-Road is its electronically controlled rear locking rear differential that offers added traction on rugged terrain. In this respect we should point out that Chevy’s Colorado Bison off-road model comes with front and rear locking differentials for superior off-road traction. As such, we wonder why Toyota didn’t follow suit as it would make Tacoma more competitive and enticing for serious off-roaders.

The Off-Road came with some helpful niceties like a Multi-Terrain Monitor that gives views around the entire truck and a 360-degree birds eye view. Standard too is a GoPro camera mount next to the rearview mirror to record off-road adventures. It can also serve as a valuable video witness in the event of an accident.

Tacoma is also offered in Access cab and Double Cab (that was tested) and in 32 different configurations. Double Cab offers added interior and passenger space, and is the most sold version.

After a 23-inch step-in, the trucks heated front seats are on the firm side, but offer sensible lateral support that is nice when wearing bulky winter coats.

HVAC controls are large and easy to use. Below them on the vertical stack is a convenient wireless phone charger.
All Tacoma’s come standard with Toyota’s Safety Sense that includes a Pre-Collision system with Pedestrian Detection, High-Speed Dynamic Radar Cruise Control, Lane Departure Alert and Automatic LED High Beams (wasn’t crazy about this feature as I prefer when to select “high” like semi-residential roads where deer suddenly appear).

Riding on 6-lug wheels shod with Goodyear Wrangler 16-inch grippy off-road, 8-inch wide tires, Tacoma rides securely albeit on the firm side with its heavy duty suspension using famed Bilstein shocks and coil springs up front with leafs in the rear.

Depending on model selected, Tacoma is offered with a choice of two powerplants. A 2.7-liter, inline 4-cylinder with 189-hp and 180 lb/ft of torque, or the tested 3.5-liter V6, producing 278-hp and 265 lb/ft of torque for EPA mileage estimates of 18 city, 22-highway mpg. The latter couples to the 6-speed auto transmission with the combination providing spirited yet linear acceleration considering the trucks 4,495-pound curb weight.

With a lengthy standard feature list, Off-Road had a base price of $36,965. To that was added the Advanced Technology Package ($1,670) that contains blind spot monitoring with cross traffic alert, Multi-Terrain Monitor and rear parking sonar; LED headlights/foglights ($485); TRD Premium Off-Road package ($4,285) with a host of features including moonroof; bed mat ($120); paint protection film ($395); all weather floor liner/door sill protector ($248) and delivery ($1,120), took the bottom line to $45,285.

Perhaps because it was the only show in town for a long period of time, Tacoma historically demanded a premium price. In comparison, Toyota’s full-size Tundra pickup, minus some of the above listed goodies, is similarly priced offering more capacity if needed.

To its credit, Tacoma Off-Road gets good government safety ratings of a full five stars for overall safety; four for driver/passenger frontal crash; four for front seat side crash and five for rear seat; and four stars for rollover.

Tacoma is a sharp looking mid-size pickup and there are a lot of them seen on local roads. That points to a popular choice among discriminating truck buyers.