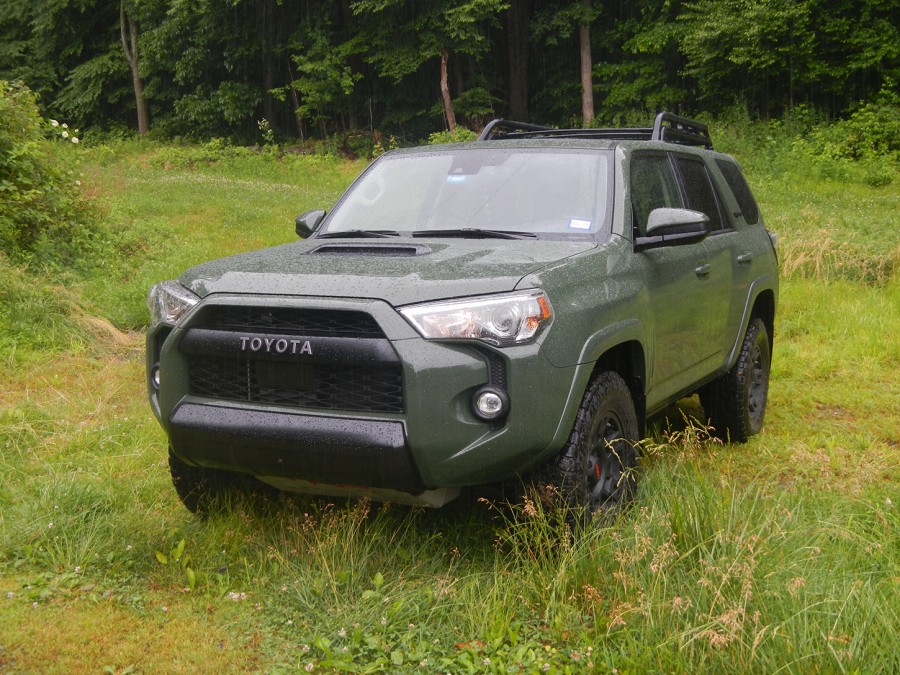 As crossovers and SUVs have become the top sellers here in the Snowbelt, there are only a few that are seriously off-road capable. One of the very few is Toyota’s 4Runner, a rock-crawler in its fifth generation.

Built on a body-on-frame platform, 4Runner TRD Pro is a rugged and true SUV. While some others claim to be an SUV, most are merely crossovers with AWD traction. Not so for the 4Runner TRD Pro. As its name implies, it’s pro grade with a locking rear axle, 9.6 inches of ground clearance, Multi-Terrain Select and Crawl Control, raised suspension with TRD tuned FOX shocks and springs, aluminum front skidplate, and a part-time Activ-Trac mechanically-linked 2High, 4High, 4Low 4WD system that serious off-roaders prefer.

For added stability, TRD Pro has a track width of 64.1 inches with 8-inch wide, 17-inch Grappler, deep lugged tires. But that’s not all. 4Runner has an acute 33-degree approach angle and a 26-degree departure angle to handle rocky terrain and a variety of nasty off-road obstacles where others fear to tread. The major competition for the 4Runner is Jeep’s Wrangler Rubicon that goes a step beyond with front and rear locking differentials, plus a disconnecting sway bar although the latter is an option with 4Runner’s Dynamic Suspension System that wasn’t on the test truck.

The TRD Pro has a rugged look with flared fenders, a sporty but non-functional hood scoop, a high stance and heavy duty tubular roof rack basket for strapping on a kayak, pair of mountain bikes, camping/hunting/fishing gear or additional spare tire.

4Runner’s exterior exudes toughness and off-road prowess. The test truck was painted in Army Green. The OD color brought back memories of my Army days and riding in a military truck and CJ Jeep.

Equipped with a 5-speed automatic transmission, its shifter is burly as is the stubby 4WD shifter. HVAC controls too are large and easy to use even with gloved hands.

On the headliner above the rearview mirror is the Multi-Terrain Select and Crawl control switches. The Multi-Terrain/Crawl has four selectable modes of Sand/Dirt, Mud/Sand, Loose Rock and Mogul. The Downhill Assist mode helps prevent excessive speed on steep downhill’s/slopes when the transfer case is in 4Low gear. For extra traction, the rear differential lock switch is located atop these controls.

The 40/20/40 back seats offer space for three tweens or two large adults. They offer generous leg room and ample head room after a 23-inch stretch into the cabin.

4Runner’s lifgate is still old school as it’s manual that has some heft to it. Liftover to load gear or packages is an easy 29 inches with a 10.5-inch protruding rear bumper that has to be negotiated. But Toyota offers an optional slide-out cargo deck that could be a handy feature.

With the rear seatbacks upright, there’s 47.2 cubic feet of cargo space that measures 39 inches deep, 48 wide and 35 high. Flip them and space increases to 89.7 cubic feet for 65.5 inches of cargo loading depth. To fold the seatbacks, the seat bottom must be lifted forward then the seat back tucked down behind it after releasing a latch so the headrests flip down so it all fits together. As such, the arrangement sacrifices six inches of cargo depth.

To move its 4,750-pound curb weight, 4Runner gets its grunt from a proven 4.0-liter V6 engine that puts out 270-hp and 278 lb/ft of torque. Coupled to the 5-speed auto trans, it earns EPA mileage estimates of 16 city, 19-highway mpg with start/stop technology. So equipped, 4Runner has a tow rating of 5,000 pounds.

Acceleration is robust. The engine roars and it gets underway in linear fashion. But punch the acceleration at 40 mph and the 4.0L takes off.

This hefty off-roader rides smoothly and smoother than the Wrangler Unlimited. 4Runner stays planted even in sharp turns. It parks relatively easily with a 37.4 foot turning radius.

With a long list of standard functions and features like Toyota’s Safety Sense that includes pre-collision system w/pedestrian detection, dynamic cruise control, lane departure alert, automatic high beams, vehicle stability control, ABS with brake assist and more. The only extra cost options were for a hitch ball mount ($60) and dashcam ($499) that took the base price of $49,765 to $51,444 with a delivery of $1,100.

Along with this, the governments’ 5-star safety rating awarded it four overall safety stars; four for driver frontal crash, three for passenger; five for front and rear seat side crash; and three for rollover.

If you’re looking for a rugged off-roader that doubles as a daily driver, you need to check out Toyota’s exceptionally capable 2020 4Runner.