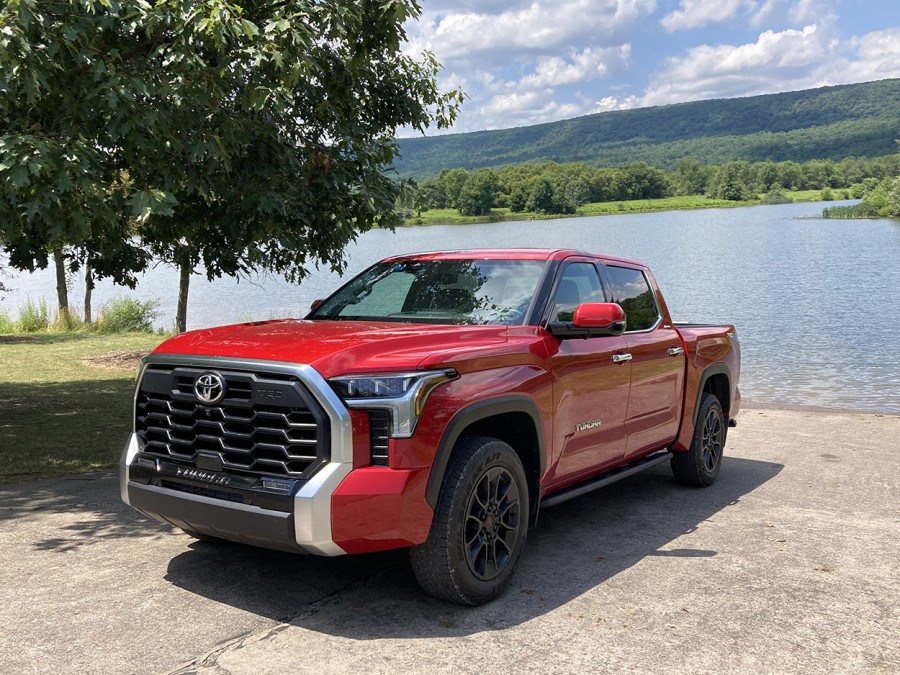 Toyota’s full-size Tundra half-ton 4WD pickup has undergone a complete overhaul for 2022. It’s actually all-new as it has a myriad of enhancements that includes an aluminum-reinforced composite cargo bed that contributes to a lighter, stronger chassis, two new powertrains plus a hybrid, a coil spring rear suspension replacing leaf springs, a chiseled muscular look, and an available 14-inch touchscreen within a restyled interior, to name some of the major changes.

Tundra’s exterior has a new face with a bold, massive grille that takes on a Mack truck look. It’s enhanced with slim LED headlamps with functional air vents. Toyota added an aluminum hood and front door panels that combined with the composite bed, provides for a weight reduction and improved fuel economy.

Tundra’s back end features large vertical taillights and a massive chrome bumper bumped-down in the middle with a step. Speaking of which, there’s a pull-out step on the driver’s side of the bumper for accessing the bed. But here’s where Toyota designers fell short. While Chevy/GMC have their Pro Tailgate that flips out with a step that also does a few other tricks, and Ford has their pull-out bed-step from within the top of the tailgate, while Ram offers a split, two-piece opening tailgate, all of which are designed for easier bed access. As such, it seems Tundra should have had a variant for this totally new model.

This subject takes me back some years ago on another manufacturer’s new truck introduction where I asked their design engineer how come they didn’t have a similar item (whatever it was) that the competition had? His reply, “Because another manufacturer has it.”

Tundra is offered in Double Cab and tested CrewMax configuration. The former Regular Cab was discontinued mainly because truck buyers prefer one of the two just mentioned.

CrewMax cab comes with a 5.5 foot bed or 6.5 foot bed. Our test truck has the 5.5 footer with four moveable tie-down hooks and four permanent ones. The inner bed sides are bumper out to hold 2x4s or a sheet of plywood for two-tier loading. The tailgate, with a 34.5-inch load height, is dampened and can be opened remotely via the keyfob.

As for the freshened interior, a tall 24.5-inch step-in requires a giant step as the truck had rock rails for serious off-roading and not a running board or step. But the rails could be used as a narrow step for toes only ingress.

The test truck came equipped with a huge and optional 14-inch center touchscreen whereas an 8-inch one is standard. It serves a host of functions that include audio, navigation, rearview camera with multiple views including a bed and 360-degree revolving view, HVAC selections and some voice control for navigation directions, climate selections, radio station changes plus it has Apple CarPlay, Android Auto connectivity.

HVAC controls are set in a horizontal array that are easy to use and below them are auxiliary switches for trailer control, external view selections and rear wheel lock for when the going gets extra tough.

There’s also a wireless phone charger at the base of the vertical stack and it shares the large console with a burly gear selector for the 10-speed automatic transmission. It shares the space with a slider switch for 2H, 4H, 4L 4WD modes. Next to it a dual mode selector for Drive modes of Eco, Normal and Sport modes, plus a separate switch for Tow-Haul trailer mode, one for MTS and another for DAC/Crawl mode.

The MTS stands for “Multi-Terrain Select” that offers added off-road modes of Mud, Rock, Dirt, Sand, Deep Snow, Mogul and Sand. The DAC/Crawl mode is a downhill assist control system that can set the speed of a downhill descent from 3-18 mph. Tundra has it all covered for serious trekking where the paved road stops.

Over on the 12.3-inch TFT digital gauge cluster, it sports a large driver information display within it for alerts, features, functions and MTS modes.

Heated/cooled front seats are substantially padded with extended under thigh support. They have a camo-like pattern on seat backs and bottoms for an outdoorsy touch.

Back seats offer gobs of leg and headroom for three adults but because of a high transaxle hump, it restricts middle seat leg room. The seatbacks flip up against the bulkhead exposing a full-width, 7-inch deep bin with removable plastic panel dividers to separate packages, gear or just a fully open bin for long items like hunting long guns or two-piece fishing rods.

Powertrain wise, there are two. The Tested iForce 3.5-liter, twin-turbo V6 generates 389-hp and 479 lb/ft of torque for EPA mileage estimates of 17 city, 22-highway mpg. Then there’s the hybrid version using the same iForce 3.5-liter twin-turbo V6 with a 288v Nickel-Metal Hydride battery stowed under the rear seat for 437-hp and 583 lb/ft of torque for EPA’s of 20 city, 24-highway mpg. Both engines use the same 10-speed automatic transmission.

The 3.5 V6 produced substantial power (especially when the twin turbo kicked in) for a tow rating of 11,170 pounds and a GVWR of 7,230. The TRD Off-Road carried an approach angle of 26.2 degrees and a departure angle of 24.2 degrees that along with a ground clearance of 11.2 inches, is capable of easily handling nasty off-roads and deep snow.

As for ride on 9-inch wide, Falken 20-inch tires, the sensation is more like a full-size SUV as its smooth and exceptionally quiet. Load the cargo bed with mulch and it rides even smoother shod with Fox coil-over shocks and coil springs. It’s a compliant ride as well when unloaded.


All in all, the Tundra caters to avid off-roaders or on-roaders who are also avid Toyota owners for their dependable quality and exceptional build.