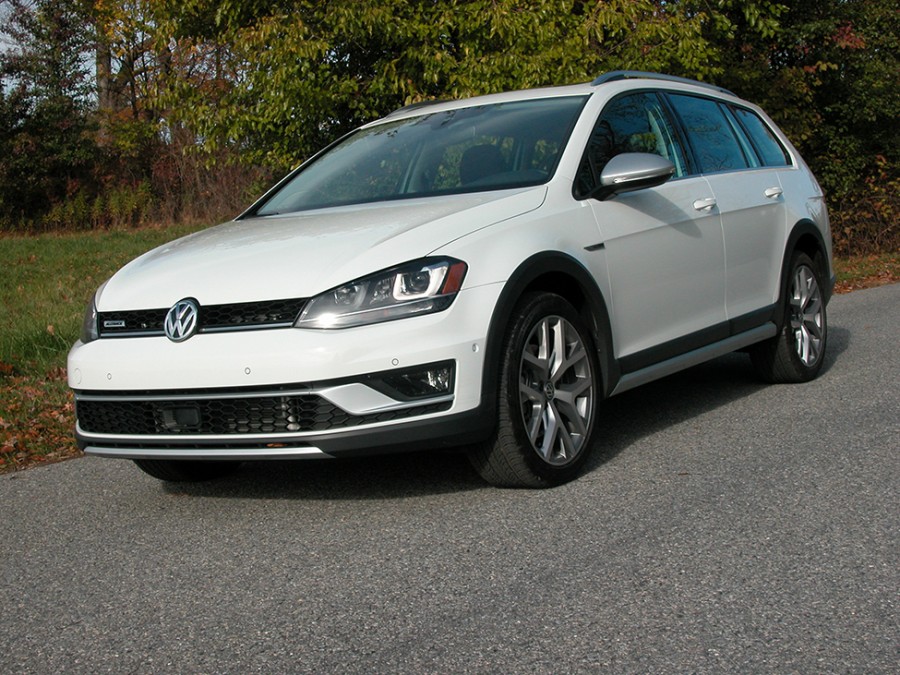 Volkswagen’s 2017 Alltrack AWD (or more appropriately labeled 4Motion) crossover, is a spin-off of the company’s Golf SportWagen. But it differs in that is has a 0.6-inch higher ride height, additional underbody protection and its Drive Mode selector includes an “Off-Road Mode.” This feature adds hill descent control while the Off-Road HMI displays compass, steering angle and altitude when going off-road.

Despite this, Alltrack is not really suited for serious off-roading like the Rubicon Trail. Sure it can handle modest roads with shallow ruts. But large rocks, deep ruts and a mere 6.9 inches of undercarriage clearance (5.5 for the SportWagen) doesn’t allow for trekking in the outback. This doesn’t mean though that Alltrack’s AWD system can’t handle mediocre snow depths or mildly rough trails. 4Motion sends grip to the front wheels for better fuel economy and when it senses wheel slip, sends 50 percent of the torque to the rear wheels.

Alltrack was designed to go after Subaru’s subcompact Impreza Crosstrek crossover. And perhaps a few others like Fiat’s 500X AWD crossover.

Offered in S, SE and top-line SEL that was tested, each step up brings extra goodies and with the SEL, 18-inch wheels to name one major upgrade.

Alltrack comes with but one engine. A 1.8L, turbocharged four-cylinder churns out a modest 170-hp and 199 lb/ft of torque that when coupled to the standard 6-speed, dual-clutch automatic transmission (a 6-speed manual will be offered for the S and SE models only), garners EPA mileage estimates of 22 city, 30-highway mpg. Crosstrek’s larger 2.0L four-cylinder is only rated at 148-hp with EPA’s of 26/28 mpg. So powered, Alltrack has lively acceleration once the turbo kicks in. Of course when that happens mileage suffers.

Ingress/egress into the firm back seat could be somewhat easier if the rear doors opened slightly wider. Two adults or three youngsters could be accommodated back there, but a high transaxle hump negates legroom for a middle occupant. There is excellent headroom and decent legroom provided the front seats aren’t racked too far rearward.

The 60/40 folding rear seatbacks have a pass-through for long items like skis or one-piece fishing rods. With the rear seatbacks upright there’s an impressive 30.4 cubic feet of cargo space and 66.5 with them folded. More understandable, the cargo area measures 40 inches deep, 40.5 wide and 27.5 high. Flip the seatbacks and depth extends to 70 inches. Cargo load height is an easy 27 inches. There is also some small item storage around the space saver spare located under the cargo floor.

Handling was sporty, nimble and impressive for a crossover. The car can be tossed in the turns with nary any body lean. As such, the ride is firm on the Continental 225/45R18 tires, but smooth on good roads and only major road imperfections reverberate into the cabin.

With a myriad of most desired features like heated outside mirrors, tire pressure monitoring and rain sensing wipers, the only extra cost option ($1,995) was for the SEL Driver Assistance and Lighting Package that included Park Distance Control (Park Pilot), Park Assist front/rear, Bi-Xenon headlights, Lane Departure Warning, Lane Assist and a few more. That brought Alltrack’s base price of $32,890 to $36,705 with delivery. This is a little more than a Subaru Crosstrek, but without comparable equipment or Alltrack’s Euro handling.

To its credit, Alltrack was also awarded the governments five-star overall safety rating, five for frontal (driver), four for passenger, five for front/rear side crash and four for rollover. Impressive ratings for a compact crossover.